The United Nations relief chief today highlighted the importance of working with South-east Asian countries to implement measures to manage and reduce the risk of disasters, which affected more than 176 million people in the region last year.

During her visit to Cambodia, Singapore, Indonesia and Thailand, the Under-Secretary-General for Humanitarian Affairs and Emergency Relief Coordinator, Valerie Amos, met with government officials and national disaster response agencies to discuss their recent experiences in disaster management.

Both Thailand and Cambodia were affected last year by floods, and Ms. Amos stressed that the international community can learn from their experiences.

“I was encouraged by the response of the national authorities in Cambodia and Thailand and I have asked if we can be part of their lessons learned process so that the international humanitarian system can improve its support in future large scale disasters,” said Ms. Amos.

She also underlined the leading role Indonesia and Singapore have played as supporters of the Association of Southeast Asian Nations (ASEAN) in disaster management.

“Indonesia and Singapore have been instrumental in driving forward an ASEAN regional agenda for disaster response to support national governments in their increasingly active and central role,” she said.

During her tour, Ms. Amos met with senior ASEAN officials and visited the ASEAN Coordinating Centre for Humanitarian Assistance on Disaster Management (AHA) in Jakarta, Indonesia, where she emphasized the importance of UN-ASEAN cooperation in responding to disasters.

“We are keen to support the new AHA centre so it can be up and running as soon as possible. We have offered our knowledge and expertise to help support its initiatives, which will ultimately ensure the most effective response when the next disaster strikes,” she said.

In 2011, there were 107 natural disasters in Asia and the Pacific, almost half of the worldwide total, with regional economic losses amounting to $296 billion.

♦ Receive daily updates directly in your inbox - Subscribe here to a topic.
♦ Download the UN News app for your iOS or Android devices.
disaster|risk 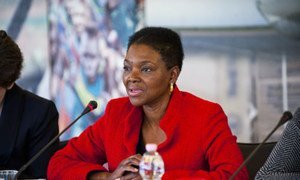 The United Nations and the Government of Indonesia today launched a package of disaster preparedness initiatives to further strengthen the country’s response capacity.