UN Photo/JC McIlwaine
Ján Kubiš, Special Representative of the Secretary-General for Afghanistan and head of UNAMA, briefs the Council.

20 March 2012
The transition process in Afghanistan remains on track despite recent tragic incidents, the United Nations envoy to the country said today, adding that efforts continue to strengthen the capacity of national institutions to maintain rule of law and provide services to the population.

“Recent events should not overshadow positive trends and developments,” said Jan Kubiš, the Special Representative of the Secretary-General and head of the UN Assistance Mission in Afghanistan (UNAMA), in a briefing to the Security Council.

“The transition so far has been on track and on target and the Afghanistan National Security Forces (ANSF) have proven that they are up to the task,” he said, referring to the gradual transfer of security responsibilities from the UN-mandated International Security Assistance Force (ISAF) to national authorities.

He said that he has, during his interactions with the leadership and other Afghans in the first two months as head of UNAMA, drawn hope from the strong expressions of the desire for peace.

“The message from the people is clear – it is time to wind down this war,” he said. “Under the people’s dialogue supported by UNAMA, Afghans across the country shared their vision and road map for a peace process.”

That dialogue also revealed that corruption, lack of justice and abuse of authority, as well as lack of opportunities for a growing population of urban youth, are regarded by the people as main problems facing them.

Another important point he had drawn from his initial meetings with Afghans was the “near universal recognition of the value of the UN’s work and a great desire for UNAMA’s continued presence,” added Mr. Kubiš.

He stressed that the transition must include accelerated Afghan leadership, as well as responsibility in governance, rule of law, justice, development, combating corruption, and fighting drug production and trafficking.

Commitments made at last year’s international conference on Afghanistan in Bonn that included calls for politically enduring partnership need to be respected by both the international community and Afghans, Mr. Kubiš said.

“In the coming months, the Government and its international partners must intensify their engagement to ensure that properly sequenced NPPs [National Priority Programmes] serve as the basis for strategic public and private funding and the achievement of development outcomes indentified by the Government as fundamental for self-reliance,” he added.

He cited improvements in conditions in Afghan detention facilities and a reduction in torture and mistreatment of detainees as some of the achievements of international efforts to improve human rights in the country.

However, violence against women and girls remains pervasive in Afghanistan, Mr. Kubiš said, adding that UNAMA is committed to continuing to work with the authorities to improve protection and the rights of women, including their participation in public life and peace and reconciliation processes, as well as equal opportunities in education and employment.

He said that one of his priorities is ensuring greater coherence of all UN efforts in Afghanistan, both programmatic, operational and policy so that the Organization’s activities are “outcome-oriented, transparent and const-effective.”

Speaking to reporters after the briefing, Mr. Kubiš said that he was happy to hear the Security Council’s strong support for the main components of UNAMA’s mandate, including good offices and political outreach, regional engagement, human rights with a special focus on women’s rights, and ensuring coherence of the work of the UN system. 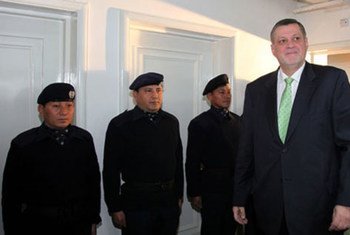 Peace process can only be successful if it is led by Afghans, says new UN envoy

25 January 2012
Afghanistan’s peace process can only be successful if it is Afghan-led and inclusive, the new United Nations envoy to the country stated today.