FROM THE FIELD: Calm in Dili as Timor-Leste votes

Patients at Timor-Leste’s national hospital, located in the capital, Dili, had an unusual sighting around 7:30 a.m. on Saturday – in addition to the doctors and nurses on their regular early rounds, mobile voting units were paying their own visits to the hospital’s patients.

With the South-east Asian nation’s presidential election taking place, every effort was being made to ensure that people could exercise their right to vote. Carrying a makeshift voting booth and ballot boxes, staff from the country’s Technical Secretariat for Electoral Administration (STAE) moved among the wards to ensure that patients and medical staff were able to cast their vote for one of the 12 candidates.

Patients welcomed their unusual visitors. One new mother, Deo Galhos, gave birth to a baby boy on Friday night and was the first of 98 patients to vote in the hospital.

“I didn’t want to lose out on the chance to vote,” Ms. Galhos said. “Mobile voting really helps the people here. We still have the opportunity to give our opinion and choose our next president.”In addition to sending mobile voting units to hospitals and clinics, more than 850 polling stations were set up around the country’s 13 districts, to allow the country’s more than 600,000 registered voters to take part in the presidential election. Many of the locations were remote and accessible only by helicopter, horseback or human porters.

The Director-General of STAE, Tomas Cabral, said that despite poor weather conditions recently, the months of planning to ensure the smooth holding of the election seemed to have paid off.

“The process of transporting election material and setting up the polling centres for election day was challenging because it has been raining all over the country,” Mr. Cabral said.

Observers noted an atmosphere of calm enthusiasm among voters in Dili, as well as a determination to have their voices heard at the ballot box. With Saturday declared a national holiday and shops closed, the city was quiet except for a steady stream of people passing through the polling stations. Election officials said orderly queues were formed and most people were in and out of the polling station within half an hour. 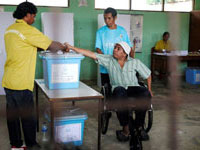 At one of the busiest polling centres in the capital, wheelchair-bound Antonio Soares de Deus was given priority passage to the front of the queue. Voting for the first time, he was happy to be part of the electoral process, describing it as a great step forward for the country’s future.“I encourage all people to vote,” Mr. Soares de Deus said. “For me, this is important because I want my country to have peace and stability.”

Secretary-General Ban Ki-moon yesterday congratulated the people of Timor-Leste for holding peaceful elections and reiterated the UN’s continued commitment to supporting the completion of this year’s electoral process, which includes legislative polls slated for June.

Watching the voting taking place, officials from the UN Integrated Mission in Timor-Leste (UNMIT) said they were happy to have a backseat role in the election. Unlike in 2007 in which it played a greater role, the UN’s involvement this year was far more limited, reflecting the increased skills and experience of the country’s electoral management bodies, the National Electoral Commission and the STAE.

“This is the first time that almost all the election process is being planned and conducted by the national authorities,” said the Chief Technical Advisor of the UN Electoral Support Team, Andres del Castillo. “The role of the United Nations is mostly focused on specific technical support, such as voter education, legal framework and some logistics – which is a very positive and welcome step from our point of view.”

UNMIT was established in 2006, following an outbreak of violence in Timor-Leste. As a result of substantial progress by the country’s authorities, especially in the areas of policing and democratic governance, the UN peacekeeping mission plans to withdraw by the end of this year.

In May, the country celebrates the tenth anniversary of the restoration of its independence. It was occupied by Indonesia from 1975 until 1999, when a popular consultation led to the establishment of Timor-Leste as the first new sovereign state of the 21st century. Saturday’s voting was the country’s third presidential election and for the country’s younger generation, elections are now a regular part of normal life in a stable democracy. 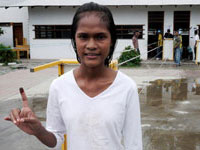 Zelia da Costa was one of those participating in an election for the first time. As a 21-year-old student, she said she wanted to choose a president who can deliver on education.“I want a future where campaign promises are realized, not just spoken about. Today I feel happy because the situation is calm, security is good, and there are no problems,” Ms. da Costa said shortly after voting. “If friends ask me I will say that voting is easy. Just bring your electoral card to the voting centre. They find you on the list. Then look for the candidate you want to choose, punch the ballot paper and put it in the box. That's all it takes!”

Secretary-General Ban Ki-moon today congratulated the people of Timor-Leste for demonstrating their commitment to democracy and peace by participating in presidential election.