The Security Council today noted with appreciation the issuance of the first verdict of the International Criminal Court (ICC), which this week found Congolese warlord Thomas Lubanga Dyilo guilty of conscripting child soldiers under the age of 15 into his militia.

“War crimes involving the most vulnerable members of society, such as children, are of particular concern and this verdict is an important step towards ensuring that those responsible for such crimes are held accountable,” the Council said in a press statement read by Ambassador Mark Lyall Grant of the United Kingdom, which holds the Council’s presidency this month.

The Court’s trial chamber found Mr. Lubanga Dyilo guilty of the war crimes of conscripting and enlisting children under the age of 15 into the Patriotic Forces for the Liberation of Congo, and using them to participate actively in hostilities in the Ituri district of north-eastern Democratic Republic of the Congo (DRC) from September 2002 to August 2003.

“The members of the Security Council reaffirm their strong opposition to impunity for the most serious crimes of international concern,” the Council’s statement said.

The 15-member body said that it recognized that this is an important moment for the victims who suffered as a result of Mr. Lubanga Dyilo’s actions and expressed its sympathy to the survivors and others who have endured similar crimes during hostilities in DRC.

Yesterday, ICC Prosecutor Luis Moreno-Ocampo told reporters in Geneva that he will on 18 April ask the Court to sentence Mr. Lubanga Dyilo to a prison term that is close to the maximum 30 years.

♦ Receive daily updates directly in your inbox - Subscribe here to a topic.
♦ Download the UN News app for your iOS or Android devices.
icc

First-ever trial at International Criminal Court, on use of child soldiers, opens 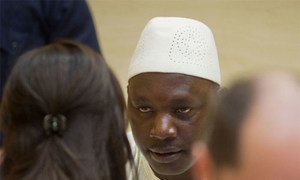 The Prosecutor of the International Criminal Court (ICC) today described the conviction of Congolese warlord Thomas Lubanga Dyilo on charges of recruiting child soldiers as “a victory for humanity,” adding that he will ask for a prison term that is close to the maximum 30 years.