As the people of Guinea-Bissau prepare to elect a new president this weekend, the United Nations human rights chief today called on all sides to ensure that the polls are free and fair.

“This is an opportunity for the Bissau-Guinean population to express its political will, and for the country to demonstrate its firm commitment to consolidating democratic institutions, strengthening political tolerance, respecting diversity and the human rights of all,” High Commissioner for Human Rights Navi Pillay said in a news release.

Sunday’s polls are taking place in the wake of the death of President Malam Bacai Sanhá, who died in January following a long illness.

Nine candidates are reportedly vying for the top post in the West African nation, which has been beset by coups, misrule and political instability since it gained independence from Portugal in the early 1970s.

Ms. Pillay warned that any threats or incitement to violence in any form, against any person, would be a violation of international human rights law.

“I urge the security services in particular to act in full conformity with the law throughout this critical electoral period. It is essential that all sides express their views in a calm manner, in accordance with the rule of law, during and after the elections.”

The High Commissioner also congratulated the people of Guinea-Bissau for maintaining a peaceful and democratic environment during the electoral process and for showing commendable levels of civic responsibility.

In a statement issued yesterday by his spokesperson, Secretary-General Ban Ki-moon appealed to national stakeholders, including the Government, political parties, civil society and the population as a whole, to ensure that Sunday’s election takes place in a peaceful, orderly and transparent manner. 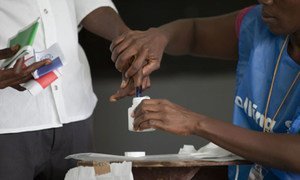 Secretary-General Ban Ki-moon today called on all actors in Guinea-Bissau to ensure a peaceful and transparent election as voters go to the polls on Sunday to choose a new president.