Three United Nations peacekeepers in Haiti have been repatriated following a Pakistani military hearing on the sexual abuse of a 14-year-old Haitian male, a spokesman for the world body said today.

The three were members of the Pakistani Formed Police Unit serving with the UN Stabilization Mission in Haiti (MINUSTAH) and were based in the northern city of Gonaives.

According to the Pakistani authorities, UN spokesperson Martin Nesirky told reporters in New York, “the guilty parties will be punished, including through dishonourable discharge from service with loss of benefits and imprisonment, the latter sentence to be served immediately on return to Pakistan.”

“The United Nations is further liaising with the Pakistani authorities to examine the formal details of the procedures and to ensure appropriate follow-up,” Mr. Nesirky added.

MINUSTAH said that a senior Pakistani official visited Haiti last week to meet with Haitian authorities and inform them that, in accordance with Pakistani national laws, a court martial proceeding was conducted this month in Port-au-Prince and found the peacekeepers guilty.

The UN has a policy of zero tolerance towards sexual exploitation and abuse by its peacekeepers. Hervé Ladsous, Under Secretary-General for Peacekeeping Operations, has said this issue is a priority for his department and deserves the utmost attention.

The 12,000-strong MINUSTAH has been in Haiti since mid-2004 after then president Jean-Bertrand Aristide went into exile amid violent unrest. 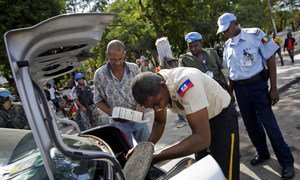 The United Nations announced today that it is investigating two cases of sexual exploitation of children allegedly committed by its police personnel in Haiti.