ICC-CPI/E. Daniel
Thomas Lubanga was found guilty of conscripting and enlisting children under the age of 15 and using them to participate in hostilities.
14 March 2012

The verdict is the first ever to be issued by the ICC, the first permanent international court set up to prosecute individuals for genocide, crimes against humanity, war crimes and the crime of aggression, since it was set up a decade ago.

The Court’s trial chamber found Mr. Lubanga Dyilo guilty of the war crimes of conscripting and enlisting children under the age of 15 into the Patriotic Forces for the Liberation of Congo, and using them to participate actively in hostilities in Ituri in north-eastern Democratic Republic of the Congo (DRC) from September 2002 to August 2003.

“A common plan was agreed by Mr. Lubanga Dyilo and his co-perpetrators to build an army for the purpose of establishing and maintaining political and military control over Ituri. This resulted in boys and girls under the age of 15 being conscripted and enlisted, and used to participate actively in hostilities,” stated a news release issued by the Court, which is based in The Hague.

The verdict was hailed by senior UN officials as a victory for the protection of children in conflict and a major milestone in the fight against impunity.

“Today, impunity ends for Thomas Lubanga and those who recruit and use children in armed conflict,” said the Secretary-General’s Special Representative for Children and Armed Conflict, Radhika Coomaraswamy. “In this age of global media, today’s verdict will reach warlords and commanders across the world and serve as a strong deterrent,” she added.

“This is a pivotal victory for the protection of children in conflict,” said UNICEF Executive Director Anthony Lake, adding that the conviction of Mr. Lubanga Dyilo “sends a clear message to all armed groups that enslave and brutalize children: impunity will not be tolerated.”

Noting that tens of thousands of children are still victims of these grave violations in at least 15 armed conflicts around the world, the agency said it will continue efforts to rescue these children and rehabilitate them.

In a statement issued by his spokesperson, Secretary-General Ban Ki-moon emphasized the need for the international community to continue with its efforts to put an end to impunity. He also urged the Congolese authorities to continue to strengthen their efforts to hold accountable all perpetrators of gross human rights violations.

UN High Commissioner for Human Rights Navi Pillay said the decision is “a great step forward” for international justice. “For many years, and on a daily basis, we have been documenting gross violations of human rights of the sort perpetrated by Lubanga against the people of the Democratic Republic of the Congo,” she said.

“The Lubanga verdict sends a strong signal against impunity for such grave breaches of international law that will reverberate well beyond the DRC.”

Also welcoming the decision was the head of the UN peacekeeping mission in DRC (MONUSCO), who stressed that sends “a powerful message to the individuals responsible for grave human rights violations that they will be held accountable for their actions.”

Roger Meece, who is also the Secretary-General’s Special Representative in DRC, strongly urged national authorities to pursue actively investigations and hold to account all who have committed human rights violations.

UN Goodwill Ambassador and Hollywood actress Angelina Jolie was among those who attended the reading of the verdict, which she said is an important moment for the Court, the DRC and the rule of law.

“Perhaps today’s verdict of guilty provides some measure of comfort for the victims of Mr. Lubanga’s actions,” she said. “Most of all, it sends a strong message against the use of child soldiers.”

A separate sentencing hearing for Mr. Lubanga Dyilo will be held at a date to be announced.

The ICC can try cases involving individuals charged with war crimes committed since July 2002. The DRC is one of seven situations under investigation by the Court, along with Central African Republic (CAR), Côte d’Ivoire, the Darfur region of western Sudan, Libya, Uganda and Kenya.

♦ Receive daily updates directly in your inbox - Subscribe here to a topic.
♦ Download the UN News app for your iOS or Android devices.
icc

First-ever trial at International Criminal Court, on use of child soldiers, opens 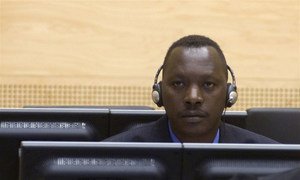 The International Criminal Court (ICC) announced today that next month it will deliver its first ever verdict, issuing a judgment in the war crimes trial of Thomas Lubanga Dyilo, a Congolese man accused of participating in the recruitment of child soldiers.