12 March 2012
General Assembly President Nassir Abdulaziz Al-Nasser today emphasized the enduring importance of the United Nations amid “a world in flux” in his address to the European Parliament in Strasbourg, France.

“Does the UN today remain the most relevant international body? Does the UN still have the tools to respond effectively to the challenges of the 21st century? To both these questions, I respond with a resolute ‘yes’,” Mr. Al-Nasser told parliamentarians.

“No other organization can claim true universality as the UN does,” he noted, adding that the UN is “the most legitimate” and “the most relevant” international organization in the world, especially in a time of major crises and challenges.

Turning his focus to the wave of unrest which has spread across the Middle East and North Africa, Mr. Al-Nasser urged the international community to support Arab countries as they transitioned to democracy.

“The historic shifts shaking the Arab world are one of the clearest expressions of the yearning for universal values the world has ever seen,” he stated. “In this critical transitional phase, the international community must support the Arab world.”

On that note, he condemned the “widespread and systematic” human rights violations in Syria as “appalling.”

Spotlighting the importance of the upcoming conference on sustainable development that will be held in Brazil in June, Mr. Al Nasser argued that the summit, also known as Rio+20, is an “historic opportunity” for the international community to tackle the “tremendous challenges” faced by humanity in the coming years.

“I urge you, the voice of the people, to encourage your governments to be as involved but also as forthcoming as possible to make Rio+20 a success,” he said.

“It is our obligation – yours and ours – to give our generation, our children and future generations, a chance to be fed, sheltered, kept healthy, educated – to be happy and full citizens of the world,” he added. 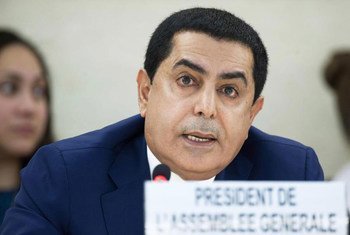