The independent United Nations expert on human rights in Iran today reiterated his concern over continuing violations in the country, including the suppression of civil liberties, arbitrary arrests and detentions, lack of due process, and a significant increase in the number of executions.

Ahmed Shaheed told the UN Human Rights Council in Geneva that Tehran continues to ignore his many requests to visit the country, and had also failed to respond to the appeals by the Council and the General Assembly to cooperate.

“This apparent unwillingness to cooperate substantively only heightens concern over the human rights situation,” said Mr. Shaheed, who is the UN Special Rapporteur on the situation of human rights in Iran.

In the absence of a field visit, Mr. Shaheed said he had resorted to monitoring the situation in Iran through a variety of credible sources, including non-governmental organizations and human rights defenders.

He cited witness accounts of arrests for engaging in activities protected by international law, for which people were detained in solitary confinement, denied access to legal counsel or family members, and were held without formal charges.

“Several stated that they were subjected to prison conditions that fall well below the minimum standards defined by the UN, such as severe overcrowding, inadequate access to water, insufficient prisoner segregation practices, extremely poor quality and unhygienic facilities, hazardous ventilation conditions, insufficient access to medical services, [and] paltry nutritional provisions,” he said.

Mr. Shaheed noted with concern that the number of executions in Iran had risen from 200 in mid-September to more than 600 by the end of last year. A majority of death penalty sentences resulted from drug offences, which he said do not meet the level of serious crimes required by international standards for imposition of the death penalty.

The imposition of the death penalty without proper judicial safeguards underscored the need for the authorities to allow legal representation of accused persons at all stages of investigations and trial, he said.

He said it was frequently reported that those who attempted to defend the accused were also met with severe punitive measures. He cited the case of the winner of the Nuremberg prize for human rights, Abdolfattah Soltani, who was arrested on charges of “propaganda against the regime, co-founding the Defenders of Human Rights Centre, assembly and collusion against the regime and accepting an illegal prize.” Mr. Soltani was sentenced to 18 years in prison and banned from practicing law for 20 years.

Mr. Shaheed urged the Iranian authorities to consider the release of human rights lawyer Nasrin Sotoudeh; student and women’s rights activist, Bahareh Hedayat; student activist Abdollah Momeni; and Pastor Yousef Nadarkhani, who was sentenced to death on charges of apostasy; and to consider the immediate release of opposition leaders Mir-Hossein Mousavi and Mehdi Karroubi, who have been under house arrest since February last year.

He welcomed the recent decision to release three journalists – Marzieh Rasouli, Parastoo Dokouhaki and Sahamoddin Bourghani – and urged the Government to continue to re-assess the cases of the 42 other journalists who remain detained on various charges, and to consider their immediate release.

Mr. Shaheed said he will continue to urge the Iranian Government to cooperate to address its human rights challenges in a “holistic and incremental manner, and with transparency and accountability.” 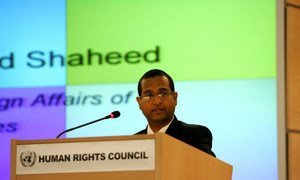