The UN’s peacekeeping chief today spoke out about the role of UN peacekeepers in tackling the Lord’s Resistance Army’s (LRA), a notorious Ugandan rebel group, operating around the border area of the eastern Democratic Republic of the Congo (DRC).

“Our Blue Helmets have been offering military escorts to merchants transporting their goods to markets as well as to churchgoers,” said the UN Under-Secretary General for Peacekeeping Operations, Hervé Ladsous, in an interview with the UN News Centre. “By patrolling in and around villages and towns where LRA presence was signalled, they have maintained a level of security and saved lives.”

The LRA was formed in the 1980s in Uganda and for over 15 years its attacks were mainly directed against Ugandan civilians and security forces, which in 2002 dislodged the rebels. They then exported their activities to Uganda’s neighbours, such as the DRC, the Central African Republic (CAR) and South Sudan, with practices that include the recruitment of children, rapes, killing and maiming, and sexual slavery.

Although current estimates suggest that the LRA comprises less than 500 combatants operating under the leadership of Joseph Kony, its capacity to attack and terrorise and harm local communities remains, Mr. Ladsous said, noting the group’s recent activities in the eastern DRC.

After a lull in LRA raids in the second half of last year that resulted in improved security in the north-eastern province, new attacks on civilians have been reported during the past few weeks in the DRC’s territories of Dungu, Faradje, Watsa, Niangara, Bondo and Ango.

Mr. Ladsous said protection of civilians is the major focus of the UN Organization Stabilization Mission in the Democratic Republic of the Congo (MONUSCO), especially across the vast mountain areas of the east, and its peacekeepers use a range of strategies.

Coordinated pressure by the national armies of CAR, DRC, South Sudan and Uganda is further weakening the LRA, Mr. Ladsous said, adding that a group of US military advisors was deployed recently and they are providing support to the regional armies.

Speaking to the press at UN Headquarters in New York today, the Under-Secretary-General for Political Affairs, B. Lynn Pascoe, said the United Nations had made attempts for several years to bring the group into a peace deal, had used its peacekeeping forces to protect civilians from the LRA and continues to work through its political office in Central Africa – the UN Regional Office for Central Africa – to forge an effective regional response to this menace.

Mr. Pascoe said success in this effort was still limited, however, in combating the group accused of widespread atrocities.

“I think we need to redouble our efforts to see what we can do because these are really ferocious crimes,” he said, adding that he hoped that Mr. Kony would be captured and tried for his alleged crimes.

The UN’s top political official also expressed appreciation for the awareness-raising potential of a video about the LRA which has gained wide notoriety on the internet.

“One of our biggest problems with the LRA and dealing with the LRA has been getting the attention to it. So I think it is very good that this gets around, that people see what’s there,” he told reporters.

Beyond MONUSCO’s role in protecting civilians in the DRC, the United Nations is strongly supporting the efforts led by the African Union and the affected countries to counter the LRA threat and bring its leaders, including Joseph Kony and others indicted by the International Criminal Court, to justice.

In a recent report, Secretary-General Ban Ki-moon assessed the threat posed by the LRA and described stepped-up military, political and humanitarian efforts involving the United Nations, the African Union and governments in the region to address it.

The UN Regional Office for Central Africa (UNOCA), a political office mandated to assist member States and sub-regional organizations in consolidating peace and preventing future conflicts, is active in efforts to forge effective regional strategies to end the threat of the LRA. Ten days ago, attendees at a joint African Union-United Nations meeting in Addis-Ababa, took stock of the progress to date and sought to strengthen coordination among all actors engaged in this effort.

According to the Special Representative of the Secretary-General on Children and Armed Conflict, the LRA abducts children from their villages and recruits them. Girls and boys are often beaten into submission and serve as combatants as well as cooks, porters, spies.

Many children are killed and wounded during fighting, others are killed because of their unwillingness to obey orders or because they try to escape. There are likely several hundreds children associated with the armed group. 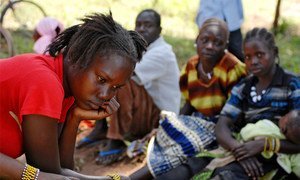 The United Nations refugee agency today voiced concern over the recent displacement of several thousand people as a result of fresh attacks by the notorious Ugandan rebel Lord’s Resistance Army (LRA) in the Orientale province of the Democratic Republic of the Congo (DRC).