9 March 2012
On the eve of the first anniversary of the earthquake and tsunami that killed more than 20,000 people in eastern Japan, United Nations officials praised the country’s recovery and highlighted the progress made to improve nuclear safety.

“Just a few days ago, UN experts reported that Japan is making enormous progress,” Secretary-General Ban Ki-moon said at an event in New York on Thursday evening, organized by the Japan’s Permanent Mission to the UN to mark the one-year anniversary. “In Sendai alone, they are processing 460 tons of waste every day. Across the region, they are recycling. Old debris is being used for new buildings. This is very heartening.”

Mr. Ban also voiced his admiration for the efforts of Japanese people to overcome the disaster and stressed that the UN will continue to work on ways to improve measures to prevent and deal with natural disasters of such magnitude.

In addition to causing widespread destruction along part of Japan’s coastline on 11 March last year, the tsunami also slammed into the Fukushima Daiichi nuclear power station, located in Fukushima Prefecture, disabling cooling systems and leading to fuel meltdowns in three of the six units. The accident shook the nuclear industry, regulators and governments; and weaknesses in the design and various oversights in the power station were later identified, which could have diminished the damage.

In his remarks, Mr. Ban stressed that since the accident he has sought to raise the profile of nuclear safety and security on the international agenda, in order to help prevent future nuclear accidents from happening.

“In the weeks after the accident, I brought together experts from across the UN to examine what happened and come up with recommendations for the world,” he said, adding that the high-level meeting on nuclear safety and security, held in September last year, was also a step towards real progress.

In Vienna, the Director General of the IAEA, Yukiya Amano, underlined that the international community had learned many lessons from the accident, which has helped make nuclear safety stronger than it was a year ago.

“Fukshima Daiichi was a very serious accident, but we know what went wrong and we have a clear course of action to tackle those causes – not only in Japan but anywhere in the world,” Mr. Amano said. He added that countries around the world are searching out weak links in their own nuclear safety systems and taking action to strengthen them.

The Secretary-General’s Special Representative for Disaster Risk Reduction, Margareta Wahlström, said the earthquake and tsunami also served to highlight the importance of having in place prevention measures,

“One of the great learnings from the Great East Japan Earthquake and Tsunami which can be applied in many other disaster-prone countries is the absolute importance of preparing populations at risk for the worst-case scenario,” Ms. Wahlström said, noting the key role that the Japanese authorities and citizens had during disaster.

“Japan excels when it comes to public awareness of risks, evacuation drills and mobilising the population in a way that few other countries can emulate. We are aware of examples of where schoolchildren seized the initiative and escaped the tsunami while also helping younger children to flee,” she said, adding that the death toll would have been much higher if people had not responded to the early warnings.

“Let us not forget this great achievement when discussing all the other things that could have been done better,” Ms. Wahlström said. 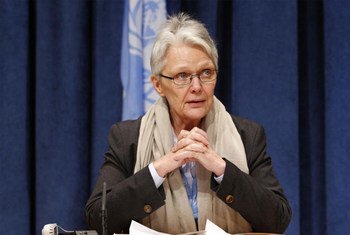 5 March 2012
The United Nations disaster risk reduction office today announced the start of consultations on a new international blueprint for reducing disaster losses ahead of a conference on the issue that Japan has offered to host in 2015.