The head of the United Nations peacekeeping mission in Haiti (MINUSTAH) stressed today that although the security situation in Haiti has improved in recent years, there is still an urgent need for police reform to ensure peace and stability in the country.

Mariano Fernández Amunátegui, who is also the Secretary-General’s Special Representative in Haiti, said that despite the progress achieved in the past eight years, the police force still needs to be strengthened and consolidated so it can continue to keep public order, protect vulnerable groups and combat organized crime.

MINUSTAH has been working closely with the Haitian National Police (HNP) in recent years to train its staff and reform its structure.

Mr. Fernández Amunátegui noted that the police force currently has 10,106 officers, almost triple the amount that it had in 2004. “But for a country like Haiti, which has 10 million people, this is still insufficient,” he told the Security Council in a briefing on the latest developments in the country.

He emphasized that although there has been progress in police training, this process has been “slow to seriously advance” the HNP’s development. “The process of selection, training and improvement of the HNP needs to be accompanied by concrete political will from Haitian authorities.”

The Special Representative noted that MINUSTAH and the HNP will work on a five-year plan that seeks to optimize a method to continue with police training and reform and consolidate current forces.

In addition, he emphasized that the security situation in the country runs the risk of quickly deteriorating without political leadership and called on the Haitian Government to appoint a new Prime Minister as soon as possible.

“Periods without a prime minister and a cabinet have been characterized by an increase in insecurity and an evident decrease in governmental management with a clear negative impact on development,” Mr. Fernández Amunátegui said. 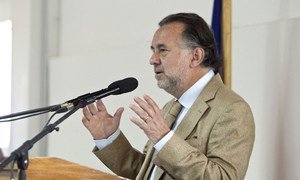