8 March 2012
The Joint Special Envoy of the United Nations and the League of Arab States for Syria today called for an immediate end to the killings and warned against the use of force to bring an end to the crisis.

The Joint Special Envoy of the United Nations and the League of Arab States for Syria, Kofi Annan, today urged Syria's President Bashar al-Assad to take “concrete steps” to end the current crisis in the Middle Eastern country.

During a meeting with Mr. Assad in Damascus, Mr. Annan also expressed his grave concern over the situation in Syria, and put forward several proposals to stop the violence and the killing, give access for humanitarian agencies and the International Committee of the Red Cross (ICRC), release detainees, and start an inclusive political dialogue to address the legitimate aspirations and concerns of the people.

According to a statement issued by his spokesperson, Mr. Annan described the talk with Mr. Assad as “candid” and “comprehensive.” The two men will resume discussions tomorrow, before Mr. Annan leaves for Doha, Qatar, in the afternoon.

While in Damascus today, Mr. Annan also met with opposition leaders and young activists, as well as prominent businessmen and businesswomen in the country.

“While this is a necessary first step, it remains essential that a robust and regular arrangement be put in place, which allows humanitarian organizations unhindered access to evacuate the wounded and deliver desperately needed supplies,” the UN's humanitarian chief said in a statement, adding that she was “horrified” by the destruction she had seen in some of the areas she visited during her two-day visit to the country.

Earlier this week, the UN High Commissioner for Refugees (UNHCR) said that as many as 2,000 refugees from Syria may have crossed into Lebanon in just two days.

The World Health Organization (WHO) also expressed concern over the civilian population in affected areas of Syria after disturbing videos surfaced claiming patients were tortured inside hospitals, and stressed that health facilities must be treated as neutral premises. 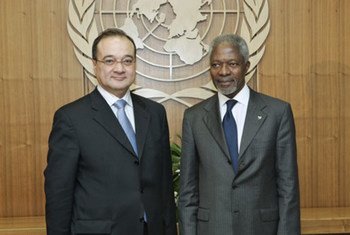