MONUSCO
Ukrainian Mi-24 tactical helicopter provided to MONUSCO on the tarmac of Goma airport in the DRC.
7 March 2012

The United Nations peacekeeping chief today expressed his gratitude to Ukraine for providing tactical helicopters for the mission in the Democratic Republic of the Congo (DRC), saying the contribution will enhance the force’s capacity to protect civilians.

“Ukraine’s contribution will help improve the mission’s ability to protect the civilian population in areas where they are threatened by the activities of foreign and national armed groups,” said

“As such, this critical contribution can make a difference in the lives of people in the affected communities,” he said, adding that he cannot “overstate the importance of Ukraine’s contribution.”

He noted that MONUSCO is one of the UN’s most challenging peacekeeping missions, and that the recent shortage of military helicopters had made its work more difficult.

“I am very grateful that Ukraine has generously answered those calls. This is consistent with Ukraine’s longstanding and invaluable support for UN peacekeeping. I am glad to say that the four helicopters are now in the DRC, and based in the east of the country,” he added.

Ukraine has also sent a contingent of military personnel to serve in MONUSCO, according to the mission.

The UN intensified efforts to secure tactical helicopters for MONUSCO after India expressed its desire to withdraw its own choppers from the mission. 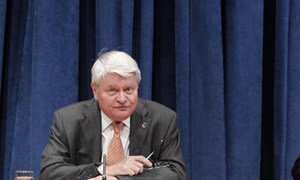 The top United Nations peacekeeping official today stressed the need to boost the mission in the Democratic Republic of the Congo (DRC) to facilitate the next phase of elections in the vast, impoverished country and protect civilians in areas where national authorities are not present.