“We see a pattern of violence and discrimination directed at people just because they are gay, lesbian, bisexual or transgender,” Secretary-General Ban Ki-moon said in a video message to the first-ever session of the UN Human Rights Council (HRC) devoted to this subject.

“This is a monumental tragedy for those affected – and a stain on our collective conscience. It is also a violation of international law,” he said.

Mr. Ban has spoken out against violence based on sexual orientation over the years. In 2010 he lauded the “courageous” decision by President Bingu wa Mutharika of Malawi to pardon a gay couple who had been sentenced to 14 years in prison and called on the Government to decriminalize same-sex relationships. More recently, he stressed the need to ensure the rights of LGBT people during a visit to Zambia.

The Secretary-General told the 47-member Human Rights Council that a historic shift is under way as more countries are seeing the gravity of this type of violence and discrimination.

“To those who are lesbian, gay, bisexual or transgender, let me say: You are not alone. Your struggle for an end to violence and discrimination is a shared struggle. Any attack on you is an attack on the universal values of the United Nations that I have sworn to defend and uphold. Today, I stand with you and I call upon all countries and people to stand with you, too,” he said.

At least 76 countries still have laws that criminalize same-sex relations, or contain vague prohibitions that are applied in a discriminatory way to prosecute lesbian, gay, bisexual or transgender (LGBT) people.

“I know some will resist what we are saying. They may argue that homosexuality and expressions of transgender identity conflict with local cultural or traditional values, or with religious teachings, or that they run counter to public opinion,” Ms. Pillay told the Geneva meeting.

LGBT rights still face opposition within the UN. Speaking on behalf of the Organization of Islamic Cooperation (OIC), Pakistan’s representative told the meeting that it had consistently and firmly opposed the controversial notion of sexual orientation, which was vague and misleading and had no agreed definition and no legal foundation in international law.

Licentious behaviour promoted under the concept of sexual orientation was against the fundamental teachings of various religions, including Islam, he added.

In her remarks, Ms. Pillay underlined that “the balance between tradition and culture, on the one hand, and universal human rights, on the other, must be struck in favour of rights,” adding that “no personal opinion, no religious belief, no matter how deeply held or widely shared, can ever justify depriving another human being of his or her basic rights.”

The report reveals that violence against LGBT people takes place in all regions, many times with consent of governments. Commonly reported incidents include targeted killings, violent assaults and acts of torture and sexual violence.

It also shows that discriminatory practices affect the ability of individuals to enjoy their human rights on a daily basis in their workplace and at school, where they run the risk of being bullied, leading LGBT people to isolation, depression and in some cases suicide.

The report calls on States to improve their investigation and prosecution of homophobic and transphobic violence to bring perpetrators to justice, and to “change discriminatory laws that treat people as criminals on the basis of their sexual orientation or gender identity.”

In addition, it urges them to recognize that this violence is a result of prejudice, which must be combated with education and information campaigns that challenge homophobia and negative stereotypes.

“Today we all have an opportunity to begin together a new chapter dedicated to ending violence and discrimination against all people, irrespective of their sexual orientation and gender identity,” Ms. Pillay said. “It is an historic moment for this Council and for the United Nations.” 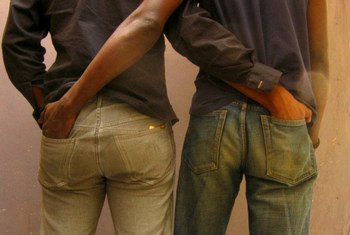 8 December 2011
Homophobic bullying of young people constitutes a “grave violation of human rights,” Secretary-General Ban Ki-moon said today, urging States to take the necessary measures to protect their citizens from violence and discrimination on the grounds of sexual orientation and gender identity