Secretary-General Ban Ki-moon today called for greater efforts to remove barriers that hinder women’s full participation in the economy, citing lack of access to jobs, markets, credit and property as some of the impediments.

“The meaningful participation of women in business – from the inclusion of women-owned businesses in supply chains, to having significant representation of women on corporate boards – also translates into stronger performance,” Mr. Ban told an event at UN Headquarters on gender equality for sustainable business.

Mr. Ban joined nearly 200 business leaders and representatives from civil society, governments and the UN to mark the second anniversary of ‘Equality Means Business,’ an initiative of the UN Entity for Gender Equality and the Empowerment of Women (UN Women) and the UN Global Compact that provides a roadmap on how business can empower women in the workplace, marketplace and community.

“We cannot achieve sustainable development without buy-in from business – from leading global corporations to small- and medium-size enterprises, from investors to entrepreneurs,” Mr. Ban told those attending the event, whose theme this year is ‘Gender Equality for Sustainable Business.’

“Nor can we achieve sustainability – at a corporate or a global level – without empowering the world’s women,” he added.

Michelle Bachelet, UN Women’s Executive Director, emphasized that countries and companies with higher levels of gender equality enjoy faster growth and better performance. “And the growth is more inclusive, which benefits all of us,” she said.

The Secretary-General said that the UN Women’s Empowerment Principles (WEPs) provide guidance on improving the status of women. Nearly 400 chief executives worldwide have publicly declared their commitment to implementing the WEPs over the past two years.

He pointed out that two other UN efforts, the ‘Every Women, Every Child’ initiative, aimed at improving the health of women and children, and the ‘Sustainable Energy for All’ initiative are also linked to the goal of achieving sustainable development while ensuring gender equality. 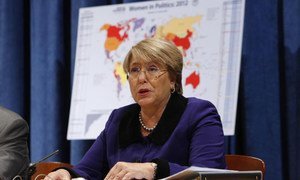 Women’s political participation must be accelerated through quotas – UN official

The head of the United Nations entity mandated to promote gender equality today highlighted the role of quotas to accelerate women’s political participation, adding that more hands-on measures are needed to achieve significant progress on this issue.