UNICEF/WHO
The world has met the MDG target of halving the proportion of people without access to safe drinking water.

6 March 2012
The goal of reducing by half the number of people without access to safe drinking water has been achieved, well ahead of the 2015 deadline for reaching the globally agreed development targets aimed at ridding the world of extreme poverty, hunger and preventable diseases, the United Nations said today.

Between 1990 and 2010, over two billion people gained access to improved drinking water sources, such as piped supplies and protected wells, according to a joint report by the UN Children’s Fund (UNICEF) and the UN World Health Organization (WHO).

Halving the number of people without access to clean drinking water is one of the targets of the Millennium Development Goals (MDGs), which include ending extreme poverty, reducing child and maternal mortality rates, fighting diseases and establishing a global partnership for development.

“Today we recognize a great achievement for the people of the world,” Secretary-General Ban Ki-moon said upon the release of the report, entitled ‘Progress on Drinking Water and Sanitation 2012’ and produced by the WHO/UNICEF Joint Monitoring Programme for Water Supply and Sanitation.

“This is one of the first MDG targets to be met. The successful efforts to provide greater access to drinking water are a testament to all who see the MDGs not as a dream, but as a vital tool for improving the lives of millions of the poorest people.”

At the end of 2010, some 89 per cent of the world’s population, or 6.1 billion people, used improved drinking water sources, according to the report. That figure is one per cent more than the 88 per cent stated in the MDG targets.

The report estimates that by 2015, some 92 per cent of the global population will have access to improved drinking water.

Mr. Lake cautioned that victory can not yet be declared because at least 11 per cent of the world’s population – 783 million people – are still without access to safe drinking water, and billions live without sanitation facilities.

“The numbers are still staggering,” he said, “But the progress announced today is proof that MDG targets can be met with the will, the effort and the funds,” he added.

UNICEF and WHO also cautioned that since the measurement of water quality is not possible globally, progress towards the MDG target of safe drinking water is measured through gathering data on the use of improved drinking water sources. Significant work must be done to ensure that improved sources of water are and remain safe, the two agencies stressed.

The global figures also mask massive disparities between regions and countries, and within countries, the two agencies emphasized.

The report also confirms that in cases where water supplies are not readily accessible, the burden of carrying water falls disproportionately on women and girls.

“We have reached an important target, but we cannot stop here,” said Mr. Ban. “Our next step must be to target the most difficult to reach, the poorest and the most disadvantaged people across the world. The United Nations General Assembly has recognized drinking water and sanitation as human rights. That means we must ensure that every person has access.”

Meanwhile, Lenny Kravitz, the Grammy award-winning singer-songwriter, record producer and actor, has thrown his support behind the global effort by UNICEF and its partners to help save and improve the lives of millions of children and their families around the world by providing them with access to clean water and adequate sanitation.

“I was born in New York City and have always taken access to clean water as a given,” said Mr. Kravitz. “No child should die of diarrhoea from drinking dirty water. That thousands of children under the age of five continue to die every day because they lack clean water and basic sanitation is simply unacceptable.”

Mr. Kravitz will be appearing in public service announcements and on Twitter and Facebook with a message that all children can – and must – have access to clean water and adequate sanitation.

The musician, who recently released the album ‘Black and White America,’ is joining forces with UNICEF to help mark World Water Day on 22 March and will send a global message of the importance of investing in children and providing them with clean water and sanitation. 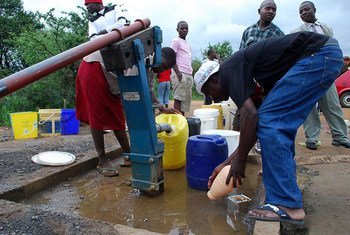 20 December 2011
The internationally stated goal of improving access to safe drinking water across the globe is likely to be achieved well ahead of the 2015 deadline, but large numbers of people in the world’s least developed regions will still not benefit, according to a United Nations report released today.