One year on, UN pays tribute to resilience of Japanese quake survivors

One year on, UN pays tribute to resilience of Japanese quake survivors

5 March 2012
A commemoration of the first anniversary of the earthquake and tsunami that struck Japan last year was held today at United Nations Headquarters, with senior officials paying tribute to the resilience of the survivors of the disaster and the efforts of the world body to help them.

The Great East Japan Earthquake, as it is known, and the ensuing tsunami, killed more than 15,000 people and destroyed cities and villages along the coast of the country’s Tohoku region. The 11 March disaster also caused major damage to the Fukushima Daiichi nuclear power station.

One year later, some 3,305 people are still listed as missing, and more than 340,000 others evacuated from the disaster zone have not been able to return.

“The world remembers. We know many people are still not back home. We realize the economic damage is enormous. And we understand that many wounds will never fully heal,” Secretary-General Ban Ki-moon said at the concert, which was sponsored by the Permanent Mission of Japan and the Japan Foundation.

“These are the sad truths. But there are many hopeful signs,” he stated. “After the Great East Japan Earthquake, the Japanese people stood up – and so did the international community.”

Mr. Ban, who saw the damage first-hand during a visit in August, recalled that the UN rushed in emergency help following the disaster. Countries donated what they could. Even schoolchildren from around the world sent messages of solidarity.

“When the earthquake struck, we immediately reached out to Japan… a country that had reached out so many times for the rest of the world.”

The concert, entitled “Overcoming the Disaster: Gratitude from Japan to the World,” featured the Japanese taiko drum troupe Ondeko-za and other musicians.

The concert was preceded by the opening of a photo exhibition – “Children and the 2011 Japan Earthquake and Tsunami: UNICEF at Work” – which pays tribute to the victims and showcases the humanitarian assistance, particularly the help provided by the UN Children’s Fund on the ground through the Japan Committee for UNICEF.

“Many of the images are heart-breaking. They serve as testimony to the scale and impact of the disaster,” Kiyo Akasaka, Under-Secretary-General for Communications and Public Information, said at the opening.

“They are also a particular reminder of the potential consequences whenever a natural disaster imperils nuclear safety,” he added.

Mr. Akasaka noted that the UN responded rapidly and in many ways. The UN Office for the Coordination of Humanitarian Affairs (OCHA) dispatched a disaster assessment and coordination team. In addition, the International Atomic Energy Agency (IAEA) worked in the months since to ensure that nuclear safety standards worldwide are the highest possible.

For its part, UNICEF announced that it would provide support through the Japan Committee for UNICEF, which subsequently set up a rescue operation with the help of donations from thousands of people around the world and to the tireless commitment of volunteers. 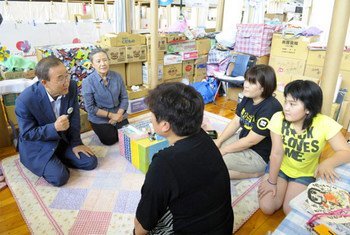 8 August 2011
Secretary-General Ban Ki-moon brought a message of international solidarity to parts of eastern Japan still reeling from the 'triple disasters' triggered by the tsunami, earthquake and nuclear accident that struck earlier this year.