5 March 2012
The Central African Republic (CAR) is facing one of the worst humanitarian funding shortfalls in the world, the United Nations warned today, adding that nearly half the country’s population is in dire need of assistance.

“The European Commission has described CAR as the world’s second most vulnerable country after Somalia,” said John Ging, Operations Director of the UN Office for the Coordination of Humanitarian Affairs (OCHA), who saw first-hand the critical conditions in which tens of thousands of people live during a visit to the country last week.

“Simply put, without adequate funding, we are failing the people, particularly the children of the Central African Republic,” Mr. Ging said.

According to OCHA, an estimated 1.9 million people need humanitarian aid, and 94,000 people are displaced around the country. Two-thirds of the population do not have access to clean water or health facilities, with one health worker for 7,000 people. In addition, about a third of the children do not have access to primary school education, and many are crowded into classrooms with 95 pupils per teacher.

“Funding for basic humanitarian needs is urgently needed,” Mr. Ging said. “Sadly, instead of an increase in funding to keep pace with the growing needs, we are now experiencing a severe reduction.”

Over the past three years, funding for the country has dramatically declined, with humanitarian organizations receiving less than 50 per cent of the required funding last year to provide life-saving aid and longer-term support. This year, only five per cent of the $134 million required has been received.

During his three-day visit, Mr. Ging travelled to Bamingui-Bangoran in north-eastern CAR, where conflict and violence has led to the displacement of more than 14,000 people in the last few months, and met people who had recently returned to their villages and need support to rebuild their lives.

“There is a very real basis for hope as thousands of displaced are returning to their villages to rebuild their lives,” he said. “However, courage alone – and there is an abundance of that here – is not enough to generate return on the scale needed, or to make it sustainable.”

Mr. Ging also met with Government officials and humanitarian partners to discuss the funding crisis and ways to improve humanitarian access and protection of the most vulnerable people.

“Humanitarian workers are saving lives every day on the frontline of this forgotten and too often dangerous crisis,” said Mr. Ging. “With the recently brokered ceasefires in conflict-affected areas, we are seeing a very real opportunity for sustainable recovery in the Central African Republic, but this is being jeopardized by the severe shortfalls in humanitarian funding. We must do everything possible to mobilize an urgent re-engagement by the donor community.” 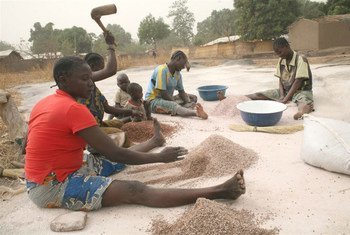 17 February 2012
The United Nations agencies and their partners today requested $134 million to fund relief programmes for an estimated 1.9 million people affected by conflict in the Central African Republic (CAR) for the next 12 months.