The United Nations disaster risk reduction office today announced the start of consultations on a new international blueprint for reducing disaster losses ahead of a conference on the issue that Japan has offered to host in 2015.

Margareta Wahlström, the head of the secretariat of the UN International Strategy for Disaster Reduction (UNISDR), said the new blueprint will build on the success of the 2005-2015 Hyogo Framework for Action (HFA) that was aimed at making the world safer from natural hazards.

The Framework was agreed at the World Conference on Disaster Reduction held in Kobe in Japan’s Hyogo Prefecture in January 2005 on the 10th anniversary of the Great Hanshin-Awaji Earthquake of 1995, and a month after the Asian tsunami.

“As we look to the anniversary of the Great East Japan Earthquake on March 11, the start of consultations on the post-HFA framework is a suitable occasion on which to acknowledge the debt that the world owes to Japan when it comes to sharing its vast experience and knowledge of disaster risk reduction and preparedness,” she said.

“The learning from the Great East Japan Earthquake will be a vital contribution to preparing the world to meet the challenges of disaster risk in the urbanized, globalized world of the 21st century where a natural hazard can trigger a chain of catastrophic events impacting lives and livelihoods in tragic ways unless we are realistic in our assessment of risk and act accordingly.”

Ms. Wahlström told a news conference at UN Headquarters that economic losses caused by natural disasters last year amounted to an estimated minimum of $380 billion, two thirds higher than the previous record in 2005. She attributed the heavy losses to the earthquake and tsunami in Japan, the New Zealand quake, and severe floods in Asia and others parts of the world.

“The main message is that this is a very rapidly increasing trend with increasing economic losses. Globally, disaster mortality is in fact proportionally decreasing, but the economics of disasters is becoming a major threat to a number of countries,” she added, pointing out that 50 per cent of the world’s population is exposed to disaster risk.

Meanwhile, the UN Environment Programme (UNEP) said today that remarkable progress has been made in sorting and disposing of millions of tonnes of waste following the catastrophic earthquake and tsunami in Japan nearly a year ago.

The so-called Great East Japan Earthquake, and the ensuing tsunami, killed more than 15,000 people and destroyed cities and villages along the coast of the country’s Tohoku region, generating about 29 million tonnes of debris in that region alone. Some 3,305 people are still listed as missing, and more than 340,000 others evacuated from the disaster zone have not been able to return.

At the request of the Government of Japan, UNEP today completed a week-long international expert mission to the post-disaster zone, visiting waste management and debris recycling facilities and sharing information and exchanging experiences with people involved in the clean-up effort.

Given Japan’s reputation as one of the best disaster-prepared countries in the world, there is intense interest from waste management and emergency response specialists in how the country has coped with the aftermath of the massive 9.0-magnitude quake, noted the agency.

UNEP’s international expert mission – organized by its International Environmental Technology Centre (IETC), in Osaka, Japan, and the Post-Conflict and Disaster Management Branch in Geneva – will be of great value in terms of sharing learning about what has been done to date to cope with post-disaster debris.

“It is impossible to look at images of the devastation without feeling enormous sympathy for the people of the Tohoku region, who are still enduring great upheaval and disruption to their daily lives,” said Achim Steiner, UNEP’s Executive Director.

“This makes Japan’s extraordinary clean-up efforts all the more remarkable. They have made commendable progress in the past 12 months, and we hope that by studying the work they have done, the technologies they used and the decisions they have made, we will be able to improve the way debris from any future disasters around the world is handled.”

UNEP hopes to use data gathered by the mission to help develop an international protocol on estimating the volume of debris in post-disaster settings. Such a protocol would prove invaluable in terms of estimating the associated workload and cost of cleaning up after disasters. 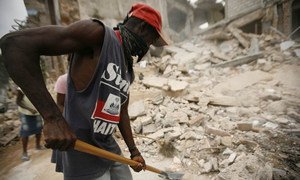 The United Nations is urging that seismic threats be taken seriously as it published new data today showing that major earthquakes claimed thousands of lives and affected millions of people in both 2010 and 2011.