Secretary-General Ban Ki-moon today underlined the need for concerted action to end the crisis in Syria, lamenting that the international community has thus far failed in its responsibility to stop the bloodshed in the country, where he said the Government was waging an “atrocious assault” against its own people.

“In fact, the actions – indeed, the inaction — of the international community seems to have encouraged the Syrian authorities in their brutal suppression of its citizens,” Mr. Ban said as he reported to the General Assembly on the implementation of its 16 February resolution on Syria.

That resolution strongly condemned the continued “widespread and systematic” human rights violations by the Syrian authorities and demanded that the Government immediately cease all violence and protect its people.

“Further militarization of the Syrian opposition is not the answer,” Mr. Ban told the Assembly.

The Secretary-General said that the newly-appointed Joint Special Envoy of the UN and the League of Arab States for Syria, Kofi Annan, will seek to end the violence and human rights violations, and promote a peaceful solution to the crisis.

Mr. Ban stressed the need to ensure that “there is only one track in the mediation process being undertaken by the international community. The way towards a peaceful solution of the Syrian crisis is difficult but clear,” he said.

“First, there should be an immediate end to the killings and violence. International relief workers must be allowed in. Second, there is a clear need for an inclusive political dialogue among all Syrian actors.

“The stakes are high, above all for the people of Syria – but also for the international community. We must act, urgently and in concert,” he said.

He pointed out that disproportionate use of force by Syrian authorities had driven what had been largely peaceful opposition forces to resort to take up arms in some cases. The opposition’s firepower, however, appeared to be minimal compared to the heavy weapons being used by the Syrian army, the Secretary-General said.

Ambassador Bashar Ja’afari of Syria repeated his country’s rejection of the General Assembly resolution, saying it did not meet “the minimum requirements of diplomatic activities in the United Nations.”

He said the Syrian Government was not consulted and the drafters of the resolution “openly turned a blind eye to Syria’s reforms and the criminal activities undertaken by armed terrorist groups.”

Mr. Ja’afari said the Syrian opposition has been invited to “participate in authentic national dialogue,” and urged the UN to provide help that is “based on the Charter.”

In a related development, the Office of the UN High Commissioner for Human Rights (OHCHR) voiced alarm today over reports from the Baba Amro district of the Syrian city of Homs after it was taken over by Government forces yesterday, including unconfirmed allegations of 17 summary executions.

“Although we are not, at this point, in a position to confirm any of those reports, we would like to remind the authorities of their responsibilities under international law,” OHCHR spokesperson Rupert Colville told reporters in Geneva.

He warned against reprisals, summary executions, torture and arbitrary detention. “The rights of those who are detained must be respected. Enough crimes have already been committed in Syria over the past year. We urge the authorities to take immediate steps to ensure no more are committed now that they have taken control of Baba Amro,” Mr. Colville added. 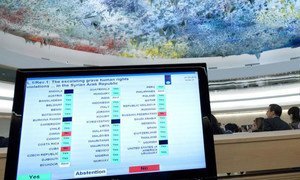