The United Nations-mandated commission of inquiry that probed human rights abuses in Libya reported today that crimes against humanity and war crimes were committed by both the troops loyal to the former ruler, Muammar al-Qadhafi, and the forces that fought to oust him.

“Acts of murder, enforced disappearance and torture were perpetrated within the context of a widespread or systematic attack against a civilian population,” according to the summary of the findings of the International Commission of Inquiry on Libya, which comprised Philippe Kirsch, Cherif M. Bassiouni and Asma Khader.

“The Commission found additional violations including unlawful killing, individual acts of torture and ill-treatment, attacks on civilians, and rape.

“The Commission further concluded that the thuwar (anti-Qadhafi forces) committed serious violations, including war crimes and breaches of international human rights law, the latter continuing at the time of the present report.”

The panel was established by an emergency session of the UN Human Rights Council on 25 February last year and mandated to investigate all alleged violations of international human rights law in Libya, establish the facts and circumstances of such violations and of the crimes perpetrated.

The commission also concluded that the North Atlantic Treaty Organization (NATO) conducted a highly precise campaign with a demonstrable determination to avoid civilian casualties. On limited occasions, it confirmed civilian casualties and found targets that showed no evidence of military utility.

“The Commission was unable to draw conclusions in such instances on the basis of the information provided by NATO and recommends further investigations,” it says in the report.

The report states that Libya’s interim Government faces many challenges in overcoming a legacy of more than 40 years of serious human rights violations and deterioration of the legislative framework, judicial and national institutions.

It took note of the transitional Government’s expressed commitment to human rights, saying authorities have taken positive steps to establish mechanisms for accountability.

The panel said the Libyan Government is gradually restoring the judiciary by reopening courts and recalling judges, and there has been some progress in the transfer of detainees to central Government control.

Nevertheless, it voiced concern over the failure to hold accountable members of the thuwar who committed serious human rights violations.

“Libyan authorities can break with the Qadhafi legacy by enforcing the law equally, investigating all abuses – irrespective of the perpetrator – and ensuring that amnesty processes comport with Libya’s obligations under international law,” the commission says.

“To give effect to its commitment to improve the human rights situation in Libya, the interim Government will need considerable support from the United Nations and the international community.”

The Commission is scheduled to present its report to the current session of the Human Rights Council in Geneva on 9 March. 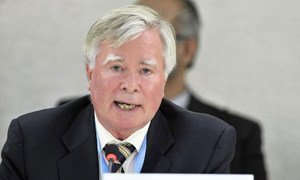