Calling 2011 a ‘critical’ year, the United Nations human rights chief today called on countries to increase measures to protect the rights of their citizens, particularly those facing discrimination and living in marginalized communities, as well as those that have been involved in civil movements.

“It was a year of substantial challenges to human rights linked to the global economic, climate, energy and food crises, famine in the Horn of Africa, armed conflict, racism and xenophobia, and lingering poverty,” UN High Commissioner for Human Rights Navi Pillay told the Human Rights Council during her presentation of her office’s annual report.

“It was also a year when we witnessed the mobilization of civil society contesting repressive power structures and failed forms of governance, particularly in the Middle East and North Africa,” she said, adding that, at a crucial time of change and uncertainty in the region, it is more relevant than ever to strengthen human rights mechanisms that bring justice to citizens whose rights have been abused.

In particular, Ms. Pillay highlighted the importance of protecting marginalized communities which face discrimination on a daily basis such as indigenous peoples, lesbian, gay, bisexual and transgender (LGBT) individuals, persons with disabilities, and the elderly.

She spotlighted several initiatives undertaken by the Office of the High Commissioner for Human Rights (OHCHR) to address this issue such as developing legislation to criminalize caste-based discrimination in Nepal, and launching the Indigenous Peoples Partnership to advance the right of minorities to participate in decision-making processes about their traditional lands.

In addition, Ms. Pillay focused on the rights of migrants, calling on Member States to explore alternatives to immigration detention that do not violate refugees’ rights, especially those of children.

“Opposing the criminalization of irregular migration, as well as drawing attention to the vulnerability and human rights violations experienced by migrants in the context of the Arab Spring, was a strong focus of our work last year,” she said, adding that she welcomed last week’s judgement of the European Court of Human Rights which ruled that it is a violation of international human rights law for a country to collectively expel migrants who are intercepted on the high seas.

During her remarks, Ms. Pillay also underlined that countries should adopt a human rights-based approach to development which takes into account the worker’s needs while also being mindful of economic requirements and environmental standards.

“I urge Member States to strive for coherence between efforts to advance the green economy, on the one hand, and human rights on the other; to recognize that policies and measures adopted to advance sustainable development must be firmly grounded in, and respectful of, human rights, including the right to development,” she said. 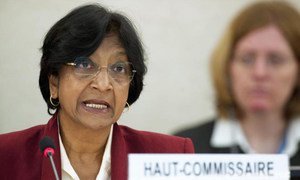 As the current session of the main United Nations human rights body began today, senior officials stressed that the Organization’s work in this area is as vital as ever, particularly at a time when men and women worldwide are rising up to demand basic freedoms and a life of dignity.