Mauritania and Burkina Faso continue to receive large numbers of Malian refugees fleeing conflict between the army and ethnic Tuareg rebels in the northern region of their country, the United Nations refugee agency said today.

“Refugees tell our staff that their main fear is of being caught up in the fighting,” Andrej Mahecic, spokesperson for the UN High Commissioner for Refugees (UNHCR), told reporters in Geneva. “They are also concerned about bandits who are taking advantage of the prevailing instability to loot homes and property.”

Tens of thousands of people have been uprooted from their homes in Mali, with many seeking refuge in neighbouring countries, since fresh clashes erupted in mid-January between the Malian army and the Tuareg insurgency known as Mouvement National de Liberation de l’Azawad (MNLA).

According to Mauritanian Government estimates, there are now over 31,000 Malian refugees in that country, the majority of them having arrived over the past six weeks, Mr. Mahecic said. Some 1,500 people are arriving daily.

In Burkina Faso, where 19,198 refugees have already been recorded by the authorities, 500 Malians on average are crossing the border every day. The number of refugees entering Niger has subsided over the past week.

The overall number of people who have crossed from Mali into neighbouring countries now stands at close to 80,000, according to official tallies.

Inside Mali, the number of internally displaced persons (IDPs) has been revised upward to 81,000, according to Government officials and humanitarian organizations operating in the north.

UNHCR has started to register refugees in all three countries of asylum to enable the agency to refine the number of affected people and establish what their needs are.

Refugees are settling along the border in the arid regions of Burkina Faso, Mauritania and Niger, where a prolonged drought has caused acute food and water shortages in recent years. A coordinated relief effort includes trucking water into areas where those in need have gathered and distributing rice and other forms of food.

“We are also planning to relocate refugees to several camps that we are establishing in the region,” said Mr. Mahecic. “In Mauritania, we have already transferred 8,300 particularly vulnerable men, women and children from the border crossing in the region of Fassala further inland to a camp called Mbera,” he added. 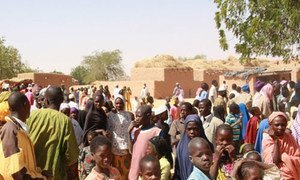 The United Nations refugee agency is appealing for $35.6 million to respond to the growing humanitarian crisis resulting from the renewed fighting in northern Mali between government forces and Tuareg rebels.