A top United Nations official expressed support today for an initiative that would allow female soccer players to wear a headscarf, also known as a hijab, while on the field, stressing that every person should have the right to enjoy the world’s most popular sport regardless of their gender, race or religious beliefs.

On Saturday, the International Football Association Board (IFAB) is set to review the laws of the game regarding the use of headscarves by female players during its annual meeting, which will be held in the United Kingdom.

“FIFA has the responsibility to ensure that everyone has an equal chance to participate in football, without any barriers and regardless of gender, race, ability, age, culture or religious beliefs,” said the Secretary-General’s Special Adviser on Sport for Development and Peace, Wilfried Lemke, stressing there are other sports that already allow the use of headscarves.

In a letter to FIFA President Joseph Blatter, Mr. Lemke voiced his support for the use of a Velcro-opening headscarf in FIFA-regulated matches and competitions. Mr. Lemke also emphasized the relevance of keeping soccer an inclusive sport which can contribute to the promotion of gender equality and women empowerment.

Mr. Lemke expressed his “wish that the issue can be resolved in a way that respects both the laws of the game as well as cultural considerations, while promoting football for all women without discrimination.

“Such a harmonization would remove a barrier that can deter women and girls from participating in football,” he said. “It would send the message that each female player, from the top elite level down to the grassroots, has the freedom to decide whether or not to wear this particular piece of attire while on the field.

“It would give the opportunity for remarkable female athletes to demonstrate that wearing the headscarf is not an obstacle to excelling in life and sports, and would hence contribute to challenging gender stereotypes and bringing about a change in mentalities,” he added.

The conference participants adopted a declaration which stressed that “the promotion of women’s participation in sports activities, management and administration should, and must, serve the wider goal of supporting the international agenda of gender equality and the empowerment of women and girls.” 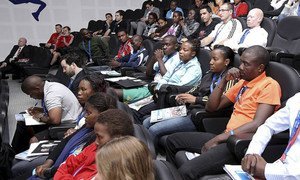 Twenty-nine young people from nine countries in sub-Saharan Africa and the occupied Palestinian territory enhanced their leadership skills on how to use sport to address social issues affecting their communities during a United Nations youth camp in Doha, Qatar.