The top United Nations envoy to Libya today expressed confidence that the North African nation will be able to overcome current difficulties and pursue the path towards the goals it committed itself to when the popular uprising began a year ago.

“It is clear that the Libyan people are eager to move forward with the transition to democracy, and their most central expectation of the United Nations is that we will support them in doing so,” Ian Martin, the Secretary-General’s Special Representative and head of the UN Support Mission in Libya (UNSMIL), told the Security Council.

Speaking via videoconference from the capital, Tripoli, Mr. Martin noted that the country has begun implementing the framework for staging the first free elections in Libya in four decades. It adopted the electoral administration law as well as the main electoral law, and appointed the High National Electoral Commission.

“Like all electoral frameworks, this parallel system is a compromise among competing views and interests, but our judgment is that the law provides a reasonable foundation for the election of the National Congress, although some gaps and shortcomings remain,” said the envoy.

Members of the National Congress, due to be elected by late June, will be tasked with drafting a new constitution for Libya, where Muammar al-Qadhafi ruled for more than 40 years until last year’s uprising led to civil war and the deposing of his regime.

Crucial to the successful conduct of elections is a “positive evolution” of the security situation, stated Mr. Martin. “The Libyan authorities well recognize that their foremost challenge is to address the future of the revolutionary fighters and the wide circulation of weapons, and to develop professional state security institutions under civilian control.”

He added that the new government that has been in place now for three months, and headed by Prime Minister Abdurrahim El-Keib, faces “tremendous challenges and a heavy legacy from the former regime” as it tries to tackle illegal migration and smuggling, effective border control, proliferation of weapons, and the need to reverse policies of long-standing discrimination against minority communities and foster national reconciliation among tribes.

This was tragically highlighted in recent days by deadly clashes which erupted between the Tabou and the Zwaya tribal brigades in the southern city of Kufra over a two-week period, with about 100 reported to have died and many others seriously injured.

The issue of torture and ill-treatment of detainees also needs to be tackled, he said, noting that further information in this regard, including on deaths in custody, have come to light over the past month through non-governmental organizations (NGOs) and UNSMIL’s own visits to places of detention.

In a speech to the UN Human Rights Council yesterday, Mr. El-Keib reiterated his Government’s human rights commitment and cooperation with the UN and others on this issue. “Strong and urgent measures are essential to give effect to these intentions,” Mr. Martin said.

Libya’s court system, he reported, is slowly coming back into operation, with several courts in Tripoli and Benghazi resuming operations, despite some concerns about security of judges and lawyers.

In addition, the transitional justice law was made public on 14 February. It establishes a fact-finding and reconciliation commission mandated to investigate crimes and human rights violations since 1969.

“While the law does not necessarily reflect best practices elsewhere, it provides an important opportunity to start a comprehensive truth-seeking process in Libya,” said the envoy.

Meanwhile, Mr. Martin on Monday concluded a three-day visit to eastern Libya to assess how the area’s conflict-affected cities – some of them still littered with mines and others kinds of unexploded ordnance – are rehabilitating themselves, even as they deal with the problem displacement, while preparing for elections.

“In New York as I was planning ahead for the United Nations post-conflict role in Libya I was constantly watching on the television the battle that was going on on the road that we’ve come on today,” Mr. Martin told the Breqa local council on his first stop.

“I have some idea of what Breqa and its people suffered, but I wanted to see that for myself and understand it better,” he said.

He visited Breqa’s heavily-damaged university and watched a slideshow documenting local efforts to clear up to 22,000 landmines planted during the conflict. Mr. Martin ended his trip to Breqa with a visit to a local school, one of 16 out of a total of 22 still functioning.

He also met with local and military councils, as well as civil society to discuss issues related to the elections, security, human rights and the ongoing demining efforts.

In Ajdabiyah, a town of 170,000 people which changed hands four times during the hostilities, Mr. Martin visited the war museum, the hospital, and the local sub-station of the Great Man-Made River water distribution system.

“One of the most impressive things was the way that local people have very quickly started addressing their own needs without waiting for any type of international assistance and indeed before the interim Government has been able to assist them,” said Mr. Martin.

Local council members in Ajdabiyah said that their city had received thousands of new internally displaced persons (IDPs) in recent days following inter-tribal clashes in the south-eastern city of Kufra. There are also IDPs from Tawargha and some Syrian refugees who have fled conflict in their country. 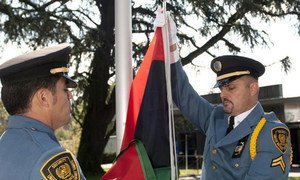 Democratic future for Libya is within reach, Ban says on anniversary of revolution

Secretary-General Ban Ki-moon marked today’s one-year anniversary of the start of the Libyan revolution by calling on the North African country’s people to work together to transition to a democracy founded on justice, the rule of law, transparency and an inclusive political process.