The United Nations atomic watchdog has called today’s announcement by the United States about the results of its talks with the Democratic People’s Republic of Korea (DPRK) over the latter country’s nuclear programme “an important step forward.”

DPRK has agreed to suspend uranium enrichment activities and nuclear weapons tests and allow inspectors from the International Atomic Energy Agency (IAEA) to verify compliance with these measures, while the US is providing the Asian country with supplies of food aid, according to media reports.

The announcement by the US Government today follows recent talks between the two countries.

In a statement, IAEA Director General Yukiya Amano underscored that the Vienna-based agency has “an essential role to play in verifying the DPRK’s nuclear programme.”

The statement added that, “pending further details, we stand ready to return to Yongbyon [the site of a nuclear reactor in the DPRK] to undertake monitoring activities upon request and with the agreement of the agency’s board of governors.”

Secretary-General Ban Ki-moon said he was encouraged by the resumption of the DPRK-US dialogue and welcomed the “positive and substantive progress” achieved at their recent talks in Beijing.

In a statement issued by his spokesperson, Mr. Ban said he hoped that the expressed commitment by DPRK to take several initial steps will be implemented toward a “verifiable denuclearization of the Korean Peninsula.”

“The Secretary-General once again encourages the parties concerned to step up their efforts to settle outstanding issues by peaceful means including dialogue,” said the statement.

He also stressed the urgency of meeting the humanitarian needs of the most vulnerable people in the country.

The head of the Preparatory Commission for the Comprehensive Nuclear-Test-Ban Treaty Organization (CTBTO), Tibor Tóth, also welcomed the announcement and said he hoped it represents a step towards the DPRK signing and ratifying the treaty banning all nuclear tests.

So far 182 countries have signed the treaty, of which 157 have also ratified it. In addition to DPRK, the other countries whose ratification is necessary for the treaty to enter into force are China, Egypt, India, Iran, Israel, Pakistan and the United States. 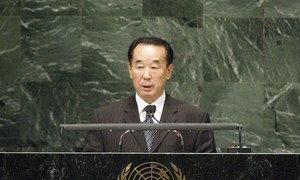 DPR Korea, at UN, calls for dialogue with US on de-nuclearizing peninsula

The Democratic Peoples Republic of Korea (DPRK) called today at the United Nations for a full-fledged dialogue with the United States and warned that reunification of the Korean Peninsula could only come through a federal formula as absorption would lead to war.