Secretary-General Ban Ki-moon and Kofi Annan have held talks today to discuss how the newly appointed Joint Special Envoy of the United Nations and the Arab League for Syria can help to end the deadly violence gripping the country and find a peaceful political solution.

Mr. Ban and Mr. Annan met at UN Headquarters in New York as Mr. Ban warned that the situation in Syria – where thousands of civilians have died over the past year as a result of a Government crackdown against a pro-democracy uprising – “has grown increasingly desperate.

“There is no more urgent task before the international community than to end the killing, immediately,” Mr. Ban told journalists after the meeting. “The Government must cease using force against civilians.

“We seek a cessation of violence that sets the stage for a peaceful solution – a solution that offers all the Syrian people, regardless of religion or ethnicity or political affiliation, a future of security, dignity and freedom.”

After further discussions this week with UN officials in New York, Mr. Annan will travel shortly to Cairo, Egypt, to meet with Nabil El-Araby, Secretary-General of the League of Arab States.

“From there, I will ask him to proceed to the region, including Damascus, as soon as possible,” Mr. Ban said.

“It’s a tough challenge and the first thing we need, as the Secretary-General has said, is to do everything we can to stop the violence and the killing, to facilitate humanitarian access and ensure that the needy are looked after.”

He added that it was vital to work “with the Syrians in coming up with a peaceful solution which respects their aspirations and eventually stabilize the country.”

Mr. Annan stressed the need for “one single, unitary process” of mediation, saying it would ensure that the international community speaks with a powerful voice and prevents parties to the conflict from playing off mediators against each other.

Mr. Ban also said today that he was “extremely disappointed” that Valerie Amos, the UN Emergency Relief Coordinator and Under-Secretary-General for Humanitarian Affairs, has still not been permitted to visit Syria, “despite the clear need and despite repeated commitments by the Government that she would be welcomed.”

In her own statement Ms. Amos voiced disappointment and backed the call of the International Committee of the Red Cross (ICRC) for a daily pause in hostilities so that aid organizations can evacuate the wounded and deliver supplies of food and medicine.

“Given the rapidly deteriorating humanitarian situation, with an increasing need for medical assistance, food and basic supplies, improving access so that assistance can reach those in urgent need is a matter of the highest priority,” Ms. Amos said.

The intensified violence in recent weeks, particularly in neighbourhoods of the city of Homs, has led senior UN officials to step up their calls for a humanitarian ceasefire.

Tomorrow, in Geneva, the Human Rights Council will also resume its urgent debate on the issue. 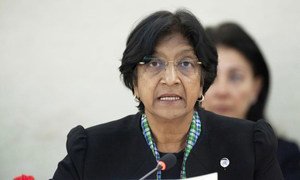