27 February 2012
The United Nations top envoy in Iraq today underlined the central role played by the country’s electoral commission in enhancing the democratic process and praised members of the current body for laying the foundation that ensures that voters can exercise their franchise fairly.

“There cannot be democracy without elections, and since its establishment in 2007, IHEC [Independent High Electoral Commission] has been fulfilling its constitutional mandate to plan, administer and conduct elections,” said Martin Kobler, the Secretary-General’s Special Representative and head of the UN Assistance Mission for Iraq (UNAMI).

“Your efforts have created a solid foundation for your successors to ensure the rights of Iraqi voters to choose their leaders and policies in a fair, legal process,” he said when in met with the IHEC Board of Commissioners in Baghdad.

Mr. Kobler encouraged Iraq’s Council of Representatives to select a new IHEC Board of Commissioners, in accordance with the electoral law, before the expiration of the current board’s term in April.

He praised the professionalism of the IHEC staff in Baghdad and electoral offices in the country’s governorates, commending them for their sacrifices, including those killed or injured while serving the cause of democracy in Iraq.

“IHEC’s professional staff is a valuable resource for the future of elections. It should be retained and supported as it continues to build its capacity to professionally deliver upcoming elections,” said Mr. Kobler.

“Iraq and its people can take pride at the fact that IHEC has emerged as a model for most countries in the region and its expertise was solicited by a number of countries who invited Iraqi commissioners and staff to observe their elections,” he added.

Since 2004, the UN has supported seven major electoral events in Iraq.

“We are currently working with IHEC on the Kurdistan Region governorate elections and will continue to provide technical advice to our IHEC counterparts. Our objective is to contribute to further strengthening and consolidating a professional and sustainable electoral administration in Iraq,” said Mr. Kobler. 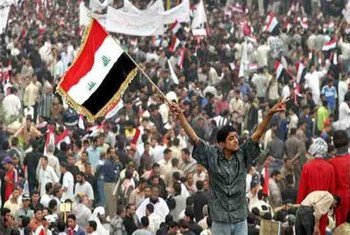 Iraq: UN mission to advise in selection of board of electoral commissioners

1 December 2011
The United Nations mission in Iraq said today it will, at the request of the country’s Council of Representatives, play the role of adviser and observer in the ongoing selection of the board of the electoral commission, in an effort to enhance the transparency and credibility of the process.