27 February 2012
As the current session of the main United Nations human rights body began today, senior officials stressed that the Organization’s work in this area is as vital as ever, particularly at a time when men and women worldwide are rising up to demand basic freedoms and a life of dignity.

Addressing the opening of the latest session of the Human Rights Council in Geneva, UN High Commissioner for Human Rights Navi Pillay said the public demand for the enjoyment of human rights has been most striking in the Arab region, where tens of thousands of women, men and young people have taken to the streets to voice their claims.

But popular movements denouncing exclusion, inequality, discrimination, absence of genuine political participation and lack of economic and social rights have emerged on all continents as people have shown themselves unwilling to accept impunity and lack of accountability for the actions of governments, international institutions and the transnational and national private sector, she noted.

“People are demanding freedom: freedom from fear, and freedom from want. They are demanding respect of the rule of law, including in the economic sphere, and full participation in decisions that affect their lives,” Ms. Pillay told delegates.

She added that the recent movements have demonstrated what heads of State endorsed and committed to at the 2005 World Summit – human rights are as important a pillar of UN action as development and peace and security.

Although constrained by resources, the High Commissioner’s office (OHCHR) has responded to the calls of those claiming the full enjoyment of their human rights through fact-finding missions and needs assessments, human rights advocacy, good offices activities and technical projects.

“Demand for our expertise and support has multiplied, and we will continue to do our best to meet them as States make the difficult transition to democracy and the rule of law,” she said.

Ms. Pillay added that, despite progress, there is still much the Council can do to meet its responsibility to ensure that all people fully enjoy their human rights. It must be even-handed in its approach, improve in following up its recommendations and other actions, and develop ways to tackle States – including among its own members – which fail to cooperate with it.

The President of the General Assembly, Nassir Abdulaziz Al-Nasser, told the 47-member Council that the UN’s human rights work “as critical, as pivotal, as pressing, as it ever has been” at the current period in world history.

“Underpinning the shifts taking place across the world are strong calls for rights, for freedom, for dignity and for justice,” he stated. “I would venture to say that never before has human rights parlance crossed the lips of so many people – young, elderly, disabled, men, women – across the world. This speaks to the universality and the legitimacy of the UN’s human rights work.”

Mr. Al-Nasser commended the Council for its “courageous” action in responding to the aspirations of peoples the world over, particularly in the case of Syria, on which the Council has held three special sessions and, tomorrow, an urgent debate.

Thousands of people, mostly civilians, have been killed in Syria since the uprising – part of the broader Arab Spring movement across North Africa and the Middle East – began last March.

Ambassador Laura Dupuy Lasserre of Uruguay, who is the current President of the Human Rights Council, said that tomorrow’s urgent debate will hopefully send a “loud and unanimous international condemnation” of violence and repression.

“The humanitarian situation is critical and we expect a positive response from the authorities that can assist all those people affected,” she added.

The UN and the Arab League last week appointed former UN chief Kofi Annan as their Joint Special Envoy for the Syrian crisis. In addition, Secretary-General Ban Ki-moon has instructed Under-Secretary-General for Humanitarian Affairs Valerie Amos to travel to Syria at the earliest opportunity to negotiate humanitarian access with the authorities.

The current session of the Council is expected to run until 23 March and consider issues such as human rights and sport, freedom of expression on the Internet, rights of persons with disabilities, and discrimination on grounds of sexual orientation. 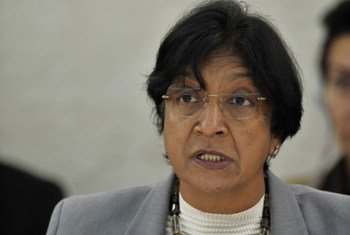 2 December 2011
The United Nations Human Rights Council today strongly condemned the continued abuses by the Syrian authorities as part of its violent crackdown against protesters which has led to the deaths of more than 4,000 people since March, including over 300 children.