Mariano Fernández Amunátegui, who is also the Secretary-General's Special Representative in Haiti, stressed in a statement that “the resignation of Mr. Conille shows, unfortunately, that rifts have taken over reconciliation efforts to the detriment of the country, while the Haitian population are aspiring to initiate a new phase that will lead towards reconstruction, economic growth, and strengthening of the rule of law.”

Mr. Fernández Amunátegui praised the contribution of Mr. Conille in the stabilization of the country, and called on Haitian authorities to focus and maintain a harmonious atmosphere that is conducive to the democratic stabilization and economic recovery of the country.

He also urged them to designate a new prime minister as soon as possible to avoid delaying the adoption of elements that form the basis of political stability such as adopting a national budget, developing a consensus agenda, publishing amendments to the constitution and organizing local, municipal and senatorial elections.

Secretary-General Ban Ki-moon also voiced his concern over Mr. Conille's resignation, saying it came at a time when the people of Haiti are eager to embark decisively on the path towards reconstruction, economic growth and the strengthening rule of law institutions.

“The Secretary-General urges the Haitian authorities to act in the interests of the Haitian people and appoint a new prime minister as soon as possible,” said a statement issued by his spokesperson.

Earlier this month, the Security Council called on the Government to implement security and improve the living conditions of thousands of Haitians who remain displaced after the January 2010 earthquake. 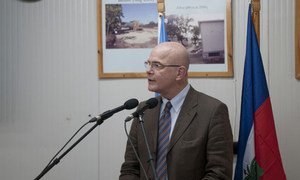 Haiti has made some progress in restoring the rule of law, the United Nations independent expert on the human rights situation in the Caribbean country said today, citing as examples the appointment of the president of the highest appellate court and the upcoming establishment of the supreme council of the judiciary.