From democracy to soccer, Zambia’s successes offer example for all – Ban

From its commitment to democracy to its soccer victory in the recent Africa Cup of Nations, Secretary-General Ban Ki-moon today lauded the Government and people of Zambia for serving as a shining example to the continent and the rest of the world.

“With hard work, energy, perseverance and faith – Zambia has proven anything is possible,” Mr. Ban said in a speech to a special session of the country’s Parliament, adding that the world had witnessed more than sporting success in Zambia’s football victory; it had also its spirit.

“You have deepened democracy and set a high bar for the continent, and indeed the world. Last September, once again, you conducted free and fair elections. Once again, you managed a smooth and dignified transition of power,” said the Secretary-General. “Once again, you showed courage and leadership across the political spectrum and across communities.”

He said democracy runs deep in Zambia and that work on a new constitution would deepen it further. “This offers Zambia an opportunity to lead once more by enshrining the highest standards of human rights and protections for all people – regardless of race, religion, gender, sexual orientation or disability.”

He noted that deforestation is happening at an alarming pace in Zambia and access to safe drinking water remains a challenge. The country’s economy is growing steadily and poverty is slowly declining. At the same time, the benefits of development are not reaching all of the women, men and children of Zambia.

He called for making a “big push” on reducing maternal, under-five and infant mortality, as well as building on the tremendous progress in HIV prevention to realize the vision to end all new HIV infections, AIDS-related deaths, and discrimination.

Mr. Ban also highlighted the need to empower women and young people, stressing that Zambia’s greatest resource is its people and the country will realize its full potential when its women and youth can realize theirs.

“I know you are working hard to integrate young women and men in national development,” he stated. “They need to feel the benefits of economic growth in their own lives and their own futures. They need quality education and the training and skills to find and create decent jobs.”

Zambia has made progress on many fronts in promoting economic and political empowerment for women, said Mr. Ban. “Yet all of us recognize there is much more work ahead,” he added, noting that women represent 51 per cent of the total population, and yet their representation in Parliament stands at 11 per cent, an all-time low.

In the area of peace and security, the Secretary-General paid tribute to the 73 Zambians who have lost their lives on UN peacekeeping duties and the more than 300 who serve in peacekeeping missions in Africa and beyond.

Zambia also has a history of welcoming people fleeing conflict, having provided shelter to hundreds of thousands of refugees over the years, he added.

In his meeting with parliamentarians, Mr. Ban discussed a range of topics, including the rights of all people regardless of sexual orientation, refugees and climate change.

Tomorrow he will visit a UN-supported project for children and will join the President of the International Olympic Committee (IOC), Jacques Rogge, on a visit to an Olympic Youth Development Centre. He will also meet the Zambian President and a number of Cabinet members.

On Sunday, the Secretary-General will visit a school in Livingstone and tourist infrastructure around Victoria Falls, before flying on to Angola.

♦ Receive daily updates directly in your inbox - Subscribe here to a topic.
♦ Download the UN News app for your iOS or Android devices.
Zambia 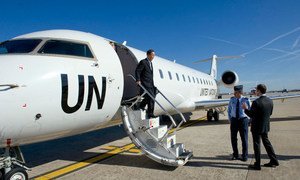 Secretary-General Ban Ki-moon will next week start a three-nation trip that will take him to the United Kingdom, where he will attend an international conference on the situation in Somalia, before proceeding to Zambia and Angola.