24 February 2012
Myanmar is only at the early stages of its transition and must continue to tackle long-standing challenges so that the Asian country can achieve lasting peace and stability, a top United Nations official said today.

“What we have seen so far are important first steps to start addressing long-standing challenges,” said Vijay Nambiar, the Secretary-General’s Special Adviser for Myanmar, during a press briefing at UN Headquarters in New York. “All stakeholders both domestic and international will need to do their bit to enable the current process of change to succeed.”

Mr. Nambiar, who visited the country last week, stressed that the Government will need to sustain momentum and positive sentiment as well as work towards delivering benefits to the population.

Mr. Nambiar also outlined three priorities that will define the pace of reform. The first priority, he said, was the need to ensure that the by-elections conducted in April are free and fair, displaying transparency in its procedures, giving all candidates and even playing field, and addressing complaints swiftly.

“The by-election will be a critical test of the Government’s commitment to broaden and enhance the credibility of the democratic process of the country.”

The second priority consists of working on the reconciliation between the Government and various ethnic groups, Mr. Nambiar said, adding that “overcoming decades of strife and mistrust through inclusive political dialogue remains an important prerequisite to building a durable peace.”

Mr. Nambiar said the third priority was to accelerate socio-economic development in the country, and called on the Government to urgently address the health, education and job creation needs for their population.

In addition, Mr. Nambiar said that development would only be achieved if the population is empowered to participate in the country’s growth.

“Now is the time to build the conditions for sustaining the reform for the betterment of the people of this country,” he said.

Mr. Nambiar underlined various UN initiatives and also highlighted the support the Organization will provide for the preparations and conduct of the first census in the country since 1993.

UN awards prize to promoter of education for persons with disabilities 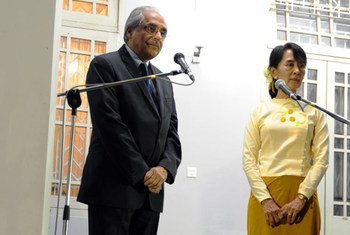 17 February 2012
Myanmar’s upcoming by-elections will serve as a critical test of the Government’s commitment to having a credible democratic process, a senior United Nations official said today, calling on authorities to ensure that all political parties can compete openly in the ballot.