24 February 2012
Secretary-General Ban Ki-moon today stressed that only a political solution will end the crisis in Syria, where the Government’s bloody crackdown against its own people continues unabated, and urged world leaders to act quickly and coherently to stop the violence.

“Each and every member of the international community has a responsibility to help stop the violence and ensure the well-being of the Syrian people,” Mr. Ban told the International Conference of the Friends of the Syrian People, held in Tunis, the capital of Tunisia.

“It is time to end the bloodshed and suffering. I urge this meeting to find common ground and act to alleviate the worsening plight of the Syrian people.”

Thousands of people, mostly civilians, have been killed since the uprising – part of the broader Arab Spring movement across North Africa and the Middle East – began last March.

“Roughly one year later, the prolonged violence now poses a profound test for the international community and the United Nations in three areas: human rights, humanitarian access and finding a political solution,” Mr. Ban said in his message, which was delivered by Under-Secretary-General for Political Affairs B. Lynn Pascoe.

Mr. Ban noted that the crisis in Syria did not start with calls for regime change. “People wanted reform and an end to oppression, exclusion, and marginalization… They were met with implacable aggression.”

He fully supported the call of the International Committee of the Red Cross for a daily humanitarian pause or truce to enable the delivery of assistance by the UN and the Syrian Arab Red Crescent, and reported that Under-Secretary-General for Humanitarian Affairs Valerie Amos will travel to Syria at the earliest opportunity to negotiate access with the authorities.

Yesterday the UN and the League of Arab States appointed former UN chief Kofi Annan as their Joint Special Envoy for the Syrian crisis, a move welcomed by the President of the General Assembly, which called for the appointment in a resolution adopted earlier this month.

Nassir Abdulaziz Al-Nasser urged the Syrian authorities and all other parties involved in the crisis “to cooperate fully with the new envoy to achieve a quick resolution that ensures the restoration of peace, security and national unity to Syria.”

He also welcomed the offer by Turkey to host the next meeting of the Friends of the Syrian People.

Mr. Annan issued a statement today, stating that he looked forward to having the full cooperation of all relevant parties and stakeholders in support of this “united and determined effort” by the UN and the Arab League to help bring an end to the violence and human rights abuses, and promote a peaceful solution to the Syrian crisis.

Also on Wednesday, the UN-appointed Independent International Commission of Inquiry on Syria released a report stating that the human rights situation inside Syria has deteriorated “significantly” since November, with continuing widespread, systematic and gross violations by security forces against civilians.

It added that the nature and scale of abuses committed by Syrian forces indicate that crimes against humanity are likely to have been committed since March 2011. “The international community must unite to ensure accountability for these crimes,” Mr. Ban said.

The UN Human Rights Council is scheduled to hold an urgent debate on Syria next Tuesday, and consider the report of the commission of inquiry on 12 March.

UN awards prize to promoter of education for persons with disabilities 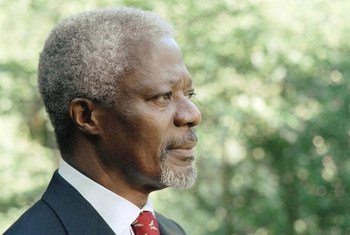 23 February 2012
The United Nations and the League of Arab States announced this evening that they have appointed the former UN chief Kofi Annan as their Joint Special Envoy to deal with the crisis in Syria, where thousands of people have been killed as a result of the Government’s ongoing crackdown against a pro-democracy uprising.