In a joint statement, UN Secretary-General Ban Ki-moon and Arab League Secretary-General Nabil El-Araby said Mr. Annan will serve as their high-level representative on the crisis, and will be supported by a deputy from the Arab world who will be chosen later.

“The Special Envoy will provide good offices aimed at bringing an end to all violence and human rights violations, and promoting a peaceful solution to the Syrian crisis,” the statement said.

“He will consult broadly and engage with all relevant interlocutors within and outside Syria in order to end the violence and the humanitarian crisis, and facilitate a peaceful Syrian-led and inclusive political solution that meets the democratic aspirations of the Syrian people through a comprehensive political dialogue between the Syrian Government and the whole spectrum of the Syrian opposition.”

Mr. Ban and Mr. El-Araby thanked Mr. Annan, who served as UN Secretary-General from 1997 through 2006, “for accepting this important mission at a critical time for the people of Syria.”

The appointment was made hours after the release of a new report by a UN-appointed panel that finds that the human rights situation inside Syria has deteriorated “significantly” since November, with continuing widespread, systematic and gross violations by security forces against civilians.

In its initial report in November the Independent International Commission of Inquiry on Syria, set up by the UN Human Rights Council last year, stated that Syria’s military and security forces have committed crimes against humanity during their crackdown on pro-democracy protesters.

In an updated report made public today, the three-member commission says that, in recent months, the crisis has become “increasingly violent and militarized.” The rise of an armed opposition led the Government to intensify its violent repression, with no let-up in the crackdown on peaceful protesters and raids on neighbourhoods suspected of supporting the opposition.

“Since November 2011, the escalation of violence, owing to the intensification of armed operations, has led to an even more dire human rights situation and increased human suffering,” the panel states.

Mr. Ban discussed the humanitarian crisis in Syria and the planned mission of the UN humanitarian chief with leaders of the European Union, the Arab League and the Organization of Islamic Cooperation (OIC) today on the margins of an international conference in London.

According to the latest report, the Government has continued to arbitrarily arrest and detain suspected protesters, opposition activists, human rights defenders and deserters; commit torture in places of detention; and allow its security agencies to systematically arrest wounded patients in State hospitals and interrogate them, often using torture.

As the violence intensified, children continued to be the victims, the report stated, adding that the State authorities “made no visible efforts to protect children’s rights.” A reliable source estimates that more than 500 children have been killed since March 2011, with the highest number of children killed in December (80 deaths) and January (72).

The Executive Director of the UN Children’s Fund (UNICEF) issued a statement following the release of the report in which he said the agency is “appalled” by the impact of the escalating violence in Syria on children.

“Calls by the international community for the violence to stop continue to go unheeded. More and more children are being killed and injured,” Anthony Lake stated. “It is deeply disturbing to hear the pleas of Syrian families in need of help and to see the worsening suffering of children.

“UNICEF echoes calls for an immediate end to all acts of violence and immediate humanitarian access to all those in need of assistance,” he added. “We ask all involved to remember that the children bear no responsibility in the violence among their elders. They are quite simply, the victims of this tragedy.”

The commission’s full report – authored by chairperson Paulo Pinheiro, Yakin Ertürk and Karen Koning AbuZayd – will be presented to the Council on 12 March.

In a related development, the Director-General of the UN Educational, Scientific and Cultural Organization (UNESCO) has condemned the Syrian army’s shelling of the makeshift media centre in the city of Homs yesterday that killed United States war reporter Marie Colvin and French photojournalist Rémi Ochlik and injured several others.

Irina Bokova urged the Syrian authorities to respect the civilian status of reporters and protect their safety. The latest deaths bring to six the number of journalists killed in Syria since the start of protests last March, according to UNESCO. 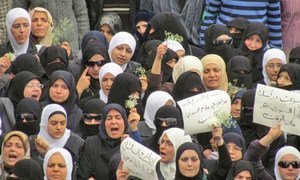