UNEP
Environment ministers at their annual meeting in Nairobi, Kenya.

22 February 2012
Environment ministers from across the world today made a commitment to ensure that the United Nations conference on sustainable development in Brazil later this year succeeds in developing concrete actions to address pressing global environmental challenges.

Environment ministers from across the world today made a commitment to ensure that the United Nations conference on sustainable development in Brazil later this year succeeds in developing concrete actions to address pressing global environmental challenges.

The ministers, who make up the Governing Council of the UN Environment Programme (UNEP), which is marking its 40th anniversary this year, said the UN Conference on Sustainable Development (Rio+20) to be held in Rio de Janeiro will be “a unique opportunity to address the economic, social and environmental challenges in the context of sustainable development.”

In a statement at the end of the three-day annual meeting of the Governing Council at UNEP headquarters in Nairobi, the ministers noted that many of the environmental challenges highlighted at the Earth Summit in Rio de Janeiro in 1992 are fast becoming reality as a result of climate change, the loss of biodiversity and fisheries to deforestation and the decline in productive and healthy soils.

Summarizing discussions at the conference, the current President of the UNEP Governing Council, Federico Ramos de Armas, Spain’s State Secretary of the Ministry of the Environment, said debate focused on the theme of the green economy in the context of sustainable development and poverty eradication, as well as institutional framework for sustainable development.

The green economy was widely viewed by the ministers and delegates as a way to achieve sustainable development, poverty eradication and the creation of decent jobs “by increasing resource efficiency, supporting the shift to sustainable consumption and production patterns and facilitating low-carbon development,” he said.

There was also a high level of support for strengthening UNEP’s mandate, authority and financial resources. More than 100 countries, including members of the African Union and the European Union, have backed a proposal to upgrade UNEP to a fully-fledged specialized agency of the UN as part of the Rio+20 outcomes.

“The world’s ministers responsible for the environment have sent a clear signal to the Rio+20 summit – namely that there needs to be an urgent focus on scaling up implementation of sustainable development and that bold, transformative decisions need to be taken in four months' time in Brazil,” said Achim Steiner, UNEP’s Executive Director. 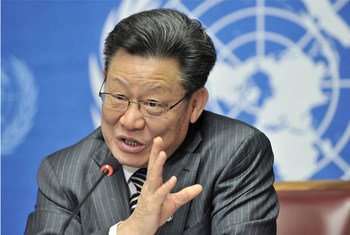 9 February 2012
A senior United Nations official today outlined a set of priorities that Member States should tackle ahead of the Sustainable Development Conference (Rio+20) in June so that there is a clear framework of action during the event.