The Security Council today called on the African Union (AU) to increase the size of its peacekeeping force in Somalia (AMISOM) by almost 50 per cent to deal with continued insecurity in the impoverished country.

The Security Council today called on the African Union (AU) to increase the size of its peacekeeping force in Somalia (AMISOM) by almost 50 per cent to deal with continued insecurity in the impoverished country.

In a unanimously adopted resolution, the 15-member body requested that AMISOM increase the number of its troops and police officers from 12,000 to a maximum of 17,731, and also decided to both expand the UN’s logistical support package to the force and extend it through 31 October.

The Council stressed that coordinated action in the region is critical for the peace, security and stability of Somalia and called on other AU member States to consider contributing troops to AMISOM to help create the conditions so that Somalia can be responsible for its own security.

Since 2007, AMISOM has been trying to bring peace to a country that has had no functioning central government for the past 20 years, during which it has been torn apart by factional fighting and has faced a series of humanitarian crises. The UN Department of Field Support (DFS) provides logistical support to the AMISOM operation.

Secretary-General Ban Ki-moon welcomed the Council’s decision this afternoon, stressing the expansion is critical to provide support to the Transitional Federal Government (TFG) and degrade the insurgency’s military capabilities across the country.

In a message issued by his spokesperson, Mr. Ban also underlined that military gains need to be consolidated through continued progress by Somalia’s political leaders in the implementation of the roadmap for ending the transition, which is the basis for lasting peace and stability in the country.

Mr. Ban will be attending tomorrow’s London Conference on Somalia, where representatives of various Member States will meet to strengthen the international effort to tackle some of the country’s most pressing issues.

Currently, one of the key challenges in Somalia is piracy, which, according to the UN Office on Drugs and Crime (UNODC), is on the increase.

“Based on our data, in 2011, pirates received about $170 million in ransoms for hijacked vessels and crews. The figure has risen since 2010, when ransoms paid amounted to over $110 million,” UNODC Executive Director Yury Fedotov told the Council meeting.

“The money is causing steep price rises in the Horn of Africa and is also being used for drugs, weapons and alcohol smuggling, as well as human trafficking,” he added, saying he was particularly concerned with strong evidence of cooperation between the militant group Al-Shabaab and pirate networks.

Mr. Fedotov highlighted the work carried out by UNODC to address piracy in the region, but reiterated the need for international support to achieve this goal.

UNODC has several programmes to tackle piracy which aim to increase awareness of illicit money flows, provide support for countries that agree to prosecute pirates, provide training for police, prison and judicial forces, refurbish prisons so that they meet international standards, and reach out to youth through advocacy programmes.

“The issue of piracy requires a strong inter-agency approach that addresses not only law enforcement and judiciary aspects of the problem, but its root causes, in Somalia itself, as well as in the world’s financial centres,” Mr. Fedotov said.

Under-Secretary for Legal Affairs Patricia O’Brien echoed Mr. Fedotov’s remarks, stating that the human cost of piracy is “incalculable,” stressing that the levels of violence and geographical scope of pirate attacks are extremely worrying.

Ms. O’Brien also briefed the Council on the status of anti-piracy courts in the region, adding that more resources and international assistance are needed to maintain these courts as there are security risks involved.

Today’s resolution also calls on Somali authorities to “take the necessary measures” to prevent the export of charcoal from the country, where the destruction of trees for charcoal has contributed to devastating droughts and served as a significant source of revenue for Al-Shabaab.

The text also asks other UN Member States to take steps to prevent the direct or indirect import of charcoal. 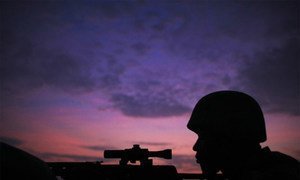 The collective efforts by the United Nations and the African Union in peace and security matters are having an important impact on the continent, Secretary-General Ban Ki-moon told the Security Council today, while stressing the need to further strengthen this vital partnership.