The United Nations human rights office has called on Mexican authorities to conduct a thorough and independent investigation into the killing over the weekend of 44 inmates at a prison in the country’s north, apparently by members of an organized criminal group.

Another 26 detainees – most of them accused of grave crimes – escaped from the prison in the state of Nuevo León on Sunday, the same day that the killings took place.

Ravina Shamdasani, a spokesperson for the UN Office of the High Commissioner for Human Rights (OHCHR), said yesterday that an investigation must take place into both the killings and the mass escape.

“Those responsible, including relevant prison authorities, must be brought to justice and all necessary measures taken to prevent such attacks from recurring,” she said.

Sunday’s killings and mass escape occurred little more than a month after 31 prisoners died and 13 others were injured during a confrontation between rival groups at a jail in Tamaulipas, a state which borders Nuevo León.

Gangs and criminal networks involved in drug trafficking have killed thousands of people in recent years in Mexico.

“The Mexican Government must also guarantee that minimum standards for prison conditions are upheld in federal and state facilities, ensuring that the safety and integrity of detainees is respected in accordance with Mexico’s international obligations,” Ms. Shamdasani said. “The Subcommittee on Prevention of Torture and other Cruel, Inhuman or Degrading Treatment or Punishment visited Mexico in 2008 and made recommendations to this end.

“We also call on the National Commission for Human Rights to closely monitor conditions of detention throughout Mexico.”

Last week, OHCHR spoke out about conditions in prisons across Latin America, saying there was an “alarming pattern of violence” and voicing deep concern at overcrowding, excessive pre-trial delays, judicial delays and a lack of access to basic services.

♦ Receive daily updates directly in your inbox - Subscribe here to a topic.
♦ Download the UN News app for your iOS or Android devices.
prison

Ban welcomes US decision on early release of 6,000 prisoners 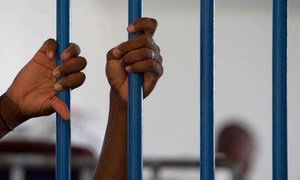