21 February 2012
As Yemenis vote today in elections that will bring to a close more than three decades of President Ali Abdullah Saleh’s rule, the United Nations is providing ongoing support to ensure that the ballot is carried out peacefully.

Yemen’s elections are being held under a peace deal that was reached last year after months of protests against the 33-year rule of Mr. Saleh, part of the wider Arab Spring reform movement across North Africa and the Middle East.

Hundreds of people died and thousands of others were wounded as the Government tried to suppress the protests, but Mr. Saleh eventually agreed to step down and transfer power to his deputy Abdrabuh Mansour Hadi Mansour the sole candidate in today’s presidential election.

To facilitate the transition process the UN Development Programme (UNDP) has provided ongoing logistical support and worked closely with the country’s Supreme Commission on Elections and Referenda and with the international community to promote civic engagement.

As part of its outreach efforts, UNDP launched a voter education campaign to reach millions of Yemenis through radio, television, advertisements on public transport, as well as online and mobile messages.

UNDP media officer Moustafa Ayad explained in a video message that the agency’s goal was to “go where the voters are” to ensure that they are aware of the election’s procedures.

In particular, the agency targeted young people by using online animation messages for the first time, as well as the participation of famous Yemeni artists who recorded a song to raise awareness of the elections.

“Our main focus was to invite people to participate in the new political phase of the country,” said Rasha Jarhym, UNDP communication and visibility officer.

Yemen also received $1 million in funding for the elections from the UN Peacebuilding Fund. In an interview with UN Radio, the fund’s chief of financing, Brian Williams, said the fund is meant to facilitate the electoral process, which represents a big logistical challenge.

He added that the money has been invested in supporting election workers, providing election material and carrying out outreach work.

Mr. Williams also stated that the fund’s financial support would continue after the elections to support the country’s transition process. 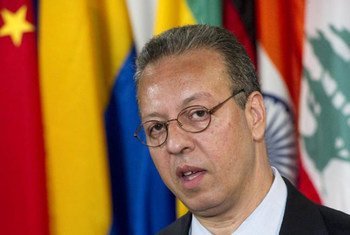 26 January 2012
Yemen’s forthcoming presidential election will be an opportunity for the country to embark on a transitional process that strengthens national dialogue and leads to a political system that will be more inclusive and open to greater participation by all citizens, says the Security Council.