21 February 2012
Government policies that facilitate private sector investment in energy markets are crucial to help tap Africa’s massive renewable energy potential, which can fuel the continent’s poverty reduction efforts and put it on a path to sustainable development, according to a United Nations report released today.

Experts estimate that unless stronger commitments are made to reverse current trends, half the population in sub-Saharan Africa will still be without electricity by 2030.

The report produced by the UN Environment Programme (UNEP) in Nairobi to mark the Africa launch of the International Year of Sustainable Energy for All, outlines how current obstacles to the scaling-up of sustainable energy solutions in Africa, such as the cost of electricity generation or difficult grid access, can be tackled.

To meet the continent’s growing energy demands, the power sector in Africa needs to install an estimated 7,000 megawatts (MW) of new generation capacity each year, the report states, and argues that much of that can come from Africa’s wealth of untapped, domestic renewable resources. Cape Verde, Kenya, Madagascar, Sudan and Chad have particularly significant potential, the study says.

“Accelerating and scaling-up sustainable energy for all will be key to realizing a transition to a low carbon, resource efficient ‘inclusive’ Green Economy,” said Achim Steiner, the UNEP Executive Director. He noted that an estimated 1.3 billion people worldwide have no access to electricity and 95 per cent of them live in Africa.

“Yet the continent has abundant renewable resources that, with the right kind of public policies in place can unlock a new development future and light up the lives and the livelihoods of millions of people,’ he said.

Mr. Steiner stressed that access to sustainable energy should be uppermost in the minds of delegates who will attend the UN Conference on Sustainable Development (Rio+20) in the Brazilian city of Rio de Janeiro in June.

Current barriers – that range from fossil fuel subsidies to the need for upfront financing – which have held back the massive sustainable energy production potential in Africa and elsewhere – should also be addressed during Rio+20.

The study gives examples of how policy incentives can help reduce the higher costs associated with electricity generation from renewable sources and improve the competitiveness of investments in the sector, compared to traditional energy sources.

In Kenya, a Government feed-in tariff introduced in 2008 to expand renewable energy power generation in the country, will give production incentives for an estimated additional energy generation capacity of 1300 megawatts, more than double Kenya’s present capacity, according to the report.

Uganda’s dedicated renewable energy policy has been praised for developing an institutional infrastructure for management of the Clean Development Mechanism (CDM) that has successfully led to a spike in renewable energy activity.

In a related development, a Nigerian radio journalist has won the UNEP’s Young Environmental Journalist Award (YEJA), beating over 120 entries from journalists across Africa.

Ugochi Anyaka, 28, received her award at a special ceremony held during the 12th Special Session of the UNEP Governing Council today in Nairobi. Her radio feature profiled a project in a low-income suburb of Abuja that manufactures briquettes from waste paper, in order to provide an alternative fuel to traditional firewood.

Meanwhile, a ‘Foresight Panel’ of 400 leading scientists and experts meeting at UNEP headquarters in Nairobi yesterday called for complete overhaul of the way the planet is managed to tackle the challenges of global sustainability for its seven billion inhabitants.

It concluded that the three leading issues facing the planet are aligning governance with the challenges of global sustainability; transforming human capabilities for the 21st century; and meeting global environmental challenges and moving towards a green economy. 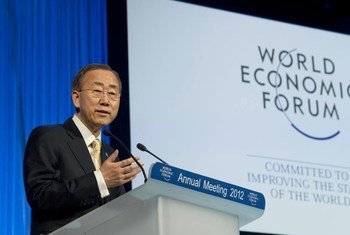 27 January 2012
Secretary-General Ban Ki-moon today stressed the importance of private investment to ensure universal and sustainable energy access, as he called on business leaders gathered in Davos, Switzerland, to mobilize their resources and strengthen their partnerships with the public and non-governmental sectors to achieve this goal.