20 February 2012
Last year's devastating floods across South-East Asia were a “wake-up call” on the need for much greater investment in disaster risk reduction across the region, a United Nations forum heard today.

Delegates from nine countries attending the one-day forum, held in Bangkok and co-organized by the UN Economic and Social Commission for Asia and the Pacific (ESCAP), called for much greater investment in disaster risk reduction in the future to protect economic growth.

The forum was held to discuss lessons learned from last year's floods and to devise ways to make the region's countries more resilient to future disasters.

More than 1,000 people were killed and billions of dollars in damage to infrastructure was reported last year during some of the worst floods in generations in South-East Asia, with Cambodia, Laos, Myanmar, Thailand and Viet Nam among the nations hardest hit. Typhoon Washi also caused enormous damage in the Philippines.

Noeleen Heyzer, the Executive Secretary of ESCAP, told the forum that national and regional disaster risk reduction plan must be implemented more quickly.

“Hazards become disasters in the absence of development and with inadequate investment in risk reduction,” she said. “This knowledge-sharing meeting presents us with the opportunity to address gaps in regional and national disaster preparedness, management and response.”

Delegates described last year's inundations as a “wake-up call to policy-makers, governments, private sector and civil society that there is a gap between rapid economic growth and investment in disaster risk reduction,” according to a press release issued by ESCAP after the forum.

The participants called for accelerated investment to fill the gap to protect key social and economic assets from disasters, especially in those areas with rapid economic growth. 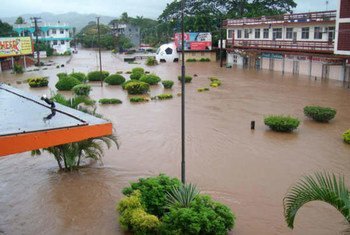 3 February 2012
The United Nations disaster risk reduction agency stressed today the need to boost preventive measures in Fiji, as heavy rains are predicted to occur more frequently in the archipelago nation, which has been ravaged by severe floods over the past week.