17 February 2012
Myanmar’s upcoming by-elections will serve as a critical test of the Government’s commitment to having a credible democratic process, a senior United Nations official said today, calling on authorities to ensure that all political parties can compete openly in the ballot.

Myanmar’s upcoming by-elections will serve as a critical test of the Government’s commitment to having a credible democratic process, a senior United Nations official said today, calling on authorities to ensure that all political parties can compete openly in the ballot.

Vijay Nambiar, the Secretary-General’s Special Adviser for Myanmar, today wrapped up a six-day visit to the Asian country, where he met with numerous top national and state officials, including President Thein Sein and Foreign Minister Wunna Maung Lwin, as well as with lawmakers, Nobel Peace Prize laureate Aung San Suu Kyi, and representatives of civil society, ethnic groups and the business community.

During his meetings, Mr. Nambiar stressed the three main priorities that will “define domestic and international perceptions of the pace of reform” being undertaken by Myanmar’s Government, according to a press release issued by the UN in Yangon, the country’s biggest city.

The first priority was ensuring that both the process leading to, and the conduct of, by-elections scheduled to take place on 1 April are credible, and that they are seen to be by everyone.

“This includes ensuring conditions for a level playing field for all parties to compete openly and addressing complaints swiftly and transparently,” he said. “The by-elections will be a critical test of the Government’s commitment to broaden and enhance the credibility of the democratic process in the country.”

The second priority is to build on existing efforts towards peace and national reconciliation, with Mr. Nambiar saying that the country is “closer than ever to a historic achievement” after recent efforts to reach ceasefires and peace accords.

“Progress is now needed with regard to the situation in Kachin state, including the needs of the displaced population,” he added. “Overcoming decades of strife and mistrust through inclusive political dialogue remains an important prerequisite to building a durable peace, which the country requires in order to move forward as one.”

The third priority, the Special Adviser said, is ensuring the Government quickly “delivers on the socio-economic needs of the people so that they start benefiting in real terms from the reforms so far.”

He cited health care, education and job creation as key responsibilities of national and local authorities.

Mr. Nambiar noted that one year after the new Government was formed and political and economic reforms were launched by Mr. Sein, “the changes currently under way in Myanmar have attained an unprecedented level of initiative, as recognized by a range of stakeholders across the political spectrum.”

He commended the President and Myanmar’s authorities for “their determination and commitment to move the country forward in a way that meets the needs and aspirations of the peoples of Myanmar.”

“It is self-evident that neither peace nor development can be sustained without respect for human rights and the rule of law,” he added. “Building on the recent release of political prisoners and other measures, further steps are necessary in order to build trust and enable the democratic transition to succeed.”

Pledging the UN’s willingness to work with the authorities and people of Myanmar, Mr. Nambiar also called on the international community to “respond more robustly to the needs of the Myanmar people by lifting current restrictions on UN programmes. Now is the time to step up support and to adjust existing policies in order to help build conditions for sustaining the reform and for the betterment of Myanmar’s peoples.”

Democratic future for Libya is within reach, Ban says on anniversary of revolution 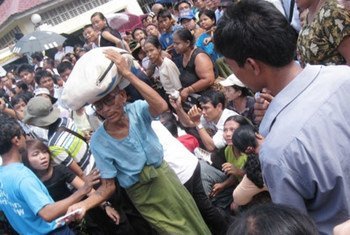 13 February 2012
The Secretary-General’s Special Adviser for Myanmar arrived in the country today for a five-day visit in which he will meet with Government authorities, political parties and civil society representatives, as the Asian nation moves ahead with planned reforms.