An estimated 18,000 Malian refugees have arrived in Mauritania, with a similar number entering Niger and over 8,000 going to Burkina Faso, according to the UN High Commissioner for Refugees (UNHCR).

There have been report of conflict erupting in Tessalit and Tinezewadern areas near Mali’s border with Algeria, a development that could send more people fleeing.

“As the influx continues, our teams are stepping up assistance for refugees who have taken refuge in makeshift shelters in villages bordering Mali,” UNHCR spokesperson Melissa Fleming told reporters in Geneva.

“Humanitarian assistance is all the more critical because the Sahel region is facing a severe food crisis due to several years of drought,” she said.

In Mauritania, the agency’s emergency team is coordinating the distribution of food and other forms of aid to 5,000 refugees. It has purchased 15-day food rations for an additional 8,000 refugees, and is trucking water to areas where refugees have sought shelter, as well as transporting emergency medical supplies provided by partners.

UNHCR teams today began revamping Mbéra camp which had hosted Tuareg refugees displaced by previous conflict in the 1990s. The site still has several water points and structures that will be renovated and turned into schools and health centres.

“In Niger, two charter flights landed Thursday night in the capital Niamey, with 2,500 tents from our stockpile in Douala, Cameroon, 500 of which will be transported on to Burkina Faso,” said Ms. Fleming. “Trucks with relief assistance are expected to arrive in Niamey and Ouagadougou from our stockpile in Accra, Ghana.”

On Wednesday, UNHCR staff travelled to northern Niger’s Ayorou district where more than 2,000 newcomers are scattered across arid border villages. Among them was 40-year-old Zoulfa, who fled Souggan village in eastern Mali with her family.

“One morning we got up and realized that all the authorities had left,” she said. “We got scared. Some armed men entered the village and stole our possessions and cattle. They shot in the air, but did not target us,” she recalled. “We left because of the insecurity, but also because of the lack of food in Mali.”

Zoulfa’s husband stayed at the border with their cattle, while she brought their four children, a donkey and some goats to Gaoudel, 10 kilometres from the border in Ayorou district. They are currently living in a makeshift shelter, where the children are covered in dust.

“It is very windy during the day and cold at night. My two-month-old baby Djamila has fever,” said Zoulfa. “We go and collect water in the Niger river, three kilometres away from here,” she added.

In Burkina Faso, some refugees are staying mainly in makeshift camps in the north, while others have moved in with host families or rented accommodation in the capital, Ouagadougou. 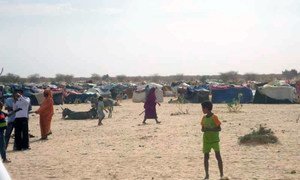 The United Nations said today it is working with Niger, Burkina Faso and Mauritania to relocate refugees fleeing renewed fighting in Mali to safer locations away from the border areas, as thousands continue to arrive on a daily basis.