The Security Council today extended for another year the mandate of the panel of experts monitoring sanctions imposed on Sudan in connection with the conflict in Darfur, voicing regret that some individuals affiliated with the Government have continued to commit violence against civilians and to impede the peace process.

Established in March 2005, the Panel of Experts is tasked with monitoring an arms embargo, travel ban and assets freeze, and inform the Council’s sanctions committee about individuals who impede the peace process, violate international law or are responsible for offensive military flights in Darfur.

The Council “expresses its intention to impose targeted sanctions against individuals and entities that meet the listing criteria,” the Council said in a resolution.

It requested the panel to coordinate its activities with the operations of the joint United Nations-African Union peacekeeping force (UNAMID), and with international efforts to promote the political process in Darfur.

The panel was also required to provide a mid-term briefing to the sanction committee on its work within 90 days of today’s extension of its mandate, and a final report not later than 30 days prior to the expiry of the new mandate on 17 February next year.

The Council asked the panel to continue to investigate the role of armed, military, and political groups in attacks against UNAMID personnel, and noted that individuals and entities who plan, sponsor or participate in such attacks constitute a threat to peace in Darfur and may be listed by the sanctions committee.

The Council urged all States, particularly those in the region, to report to the sanctions committee on all actions they have taken to implement measures imposed under the sanctions regime.

It voiced concern that the travel ban and asset freeze on designated individuals is not being implemented by all States, and requested the committee to respond effectively to any reports of non-compliance.

Darfur has since 2003 been wracked by conflict that pits Government forces and allied militiamen against rebel groups. Millions of civilians have been either internally displaced or forced to seek refuge in neighbouring countries. 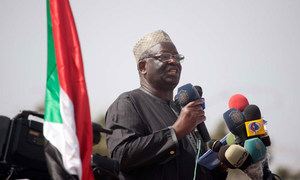 Secretary-General Ban Ki-moon welcomed today the inauguration of the Darfur Regional Authority, a body intended to stimulate development and facilitate peace in the war-torn western region of Sudan.