Madagascar: UNICEF gears up to help victims of deadly cyclone

The United Nations Children’s Fund (UNICEF) said today that it has pre-positioned enough emergency supplies to assist 100,000 people in Madagascar, where a tropical cyclone has made landfall, bringing torrential rains and intense winds.

At least two people have been confirmed killed since Cyclone Giovanna struck Madagascar’s eastern coast, just south of the port of Toamasina, about 1 a.m. today, the UN Office for the Coordination of Humanitarian Affairs (OCHA) reported.

The cyclone – which included winds of up to 180 kilometres per hour – is weakening as it crosses the country but has already caused significant damage to public infrastructure on the east coast, said Dominic Stolarow, UNICEF’s emergency coordinator in Madagascar. Several parts of Antananarivo, the capital, are also without water, electricity or telephone services.

“What needs to be done now is a proper assessment so we can understand the exact dimensions of this natural disaster,” Mr. Stolarow said. “It will help us to design an adequate response.”

Two rapid assessment teams from UNICEF are on standby in Antananarivo to be deployed to the field once conditions allow.

Marixie Mercado, a spokesperson for UNICEF, told journalists in Geneva that the agency had pre-positioned assistance for 100,000 people, with UNICEF staff also in place along the route the cyclone was taking.

Madagascar is frequently faced with cyclones and tropical storms in the early months of the year. Giovanna’s arrival is exactly a year to the day since Madagascar was struck by Cyclone Bingiza, which killed 14 people and destroyed almost 6,000 homes. 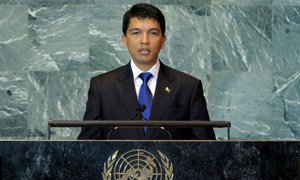 A week after reaching a deal with rivals to end Madagascar’s protracted political crisis, the country’s leader has called on the United Nations to help it establish a credible electoral timetable as soon as possible so that polls can be held in the Indian Ocean island nation.