UNHCR/A.O. Barry
UNHCR has been providing assistance to refugees from Mali such as these arrivals in Mauritania.
14 February 2012

The United Nations said today it is working with Niger, Burkina Faso and Mauritania to relocate refugees fleeing renewed fighting in Mali to safer locations away from the border areas, as thousands continue to arrive on a daily basis.

The recent outbreak of conflict in northern Mali between Government forces and Tuareg rebels has sent thousands of civilians fleeing to neighbouring countries, with the UN High Commissioner for Refugees (UNHCR) having received reports of “significant” new arrivals over the weekend in northern Niger.

“UNHCR does not at this stage have confirmed numbers for overall arrivals from Mali into Niger, but from available estimates we know there are multiples of thousands,” spokesperson Adrian Edwards told reporters in Geneva.

He said people are living in makeshift shelters, facing extremes of heat by day and cold at night. The health situation is relatively stable but there are incidences of malaria, eye infection, diarrhoea and respiratory infection, said Mr. Edwards, adding that the sanitation and clean water situation is “inadequate.”

UNHCR health experts are working with Niger’s health authorities and medical agencies on the ground to coordinate the response. They are also working with the Government on plans to move the refugees to sites away from the volatile border. The agency has identified a site to set up a camp near Ouallam town, 100 kilometres north of Niger’s capital, Niamey.

“Some refugees have told us that they are reluctant to move since they hope to return home as soon as the security conditions permit them to,” said Mr. Edwards.

“Refugees we met told us that many people are now displaced at the Mali border areas and that they might cross over to Niger should the confrontation situation in Mali deteriorate,” he added.

According to the authorities in Burkina Faso, 8,000 people have entered that country so far, many of them women and children. The Government has asked UNHCR to help with the relocation of thousands of these refugees from spontaneous settlements in the north of the country, to two sites in Goudebo and Ingani, further away from the border.

Meanwhile, UNHCR said that over 13,000 people have arrived in the past two weeks – an average of 1,000 a day – in Mauritania, where they are living in makeshift shelters. The agency is working with the Mauritanian authorities and local non-governmental organizations (NGOs) to prepare a camp in M’Bera, 50 kilometres from the border. 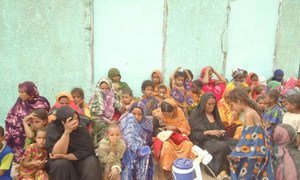