13 February 2012
Israel and the Palestinians must cease provocations and take concrete steps to restore trust and create a conducive environment for direct talks, Secretary-General Ban Ki-moon stressed today, pledging to do everything in his power to help the parties advance the peace process.

“The status quo is unsustainable. All efforts must be made towards a positive change,” Mr. Ban said in remarks to the 2012 session of the UN Committee on the Exercise of the Inalienable Rights of the Palestinian People.

“The parties should do their utmost to resolve all permanent status issues, end the conflict, and establish an independent, democratic, contiguous and viable Palestinian State living side by side in peace with a secure Israel,” he added.

The committee was set up in 1975 by the General Assembly to enable the Palestinians to exercise their rights to self-determination, national independence and sovereignty and to return to their homes and property from which they were displaced.

“It is time to realize the legitimate rights and aspirations of the people of Palestine and the people of Israel,” said Mr. Ban, who recently returned from Israel and the occupied Palestinian territory, where he encouraged the parties to re-engage in earnest towards the resumption of permanent status negotiations.

He cited the need for concrete steps on the ground to restore confidence and trust. The parties have a particular responsibility to cease provocations and create a conducive environment for direct talks, he said.

“Israel’s continued settlement activity is a major obstacle and prejudices final status issues,” said the Secretary-General. “It must cease.”

He added that unilateral actions on the ground will not be accepted by the international community.

For its part, the Palestinian Authority should also find ways to de-escalate the situation, improve the divisive climate, including by combating incitement, and engage directly in the search for a negotiated solution, said Mr. Ban.

He also renewed his call for immediate steps towards lifting the closure of the Gaza Strip and the full opening of legitimate crossings for the import of construction materials critical for the area’s economic recovery – changes that can be implemented “with due consideration for Israel’s legitimate security concerns, while making a significant difference in the lives of ordinary Gazans.” 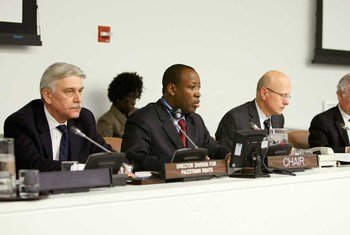 19 August 2011
A United Nations committee on Palestinian rights today called on the international community to take “credible and decisive action” to compel Israel to halt its settlement activity in occupied Palestinian territory.