The United Nations today welcomed the official start of operations for Libya’s new electoral authorities, but urged that the framework for staging the first free elections in the North African country in four decades be implemented as quickly as possible.

The members of Libya’s Higher National Electoral Commission were sworn in yesterday, days after Libya’s interim authorities – the National Transitional Council (NTC) – adopted electoral laws that set out details on the holding of polls later this year to choose members of the National Congress.

The National Congress will be tasked with drafting a new constitution for Libya, where Muammar al-Qadhafi ruled for more than 40 years until a pro-democracy uprising last year led to civil war and the deposing of his regime.

In a statement issued today in Tripoli, the capital, the UN Support Mission in Libya (UNSMIL) said the swearing-in of commission members means that the commission can now begin operational electoral preparations in earnest.

It voiced hope that the electoral authorities will be able to set up a functional administration in the days ahead to advance practical preparations for the polls.

“UNSMIL appreciates that the process of developing an electoral law took longer than envisaged in the constitutional declaration [of 3 August 2011] given the political sensitivities involved when deciding the basic modalities for the first election in the country for over 40 years,” the statement said.

“Despite difficult conditions and a limited time frame, it is encouraging that the NTC electoral committee did their best to respect the deadlines established in the constitutional declaration and that the delay in the adoption of the legal framework was only a limited one.”

The mission underscored that the tight time frame for the elections – due to be held by late June – meant “implementation of the framework will require swift and immediate preparation.”

The statement also acknowledged that while the NTC electoral committee addressed many comments from stakeholders during the period of public consultation before the laws were adopted, some stakeholders felt that the process of dialogue regarding the legal framework for the elections was limited.

“Overall, it is our belief that the adopted legal framework is a reasonable foundation for the election of the National Congress, although some gaps and shortcomings are still present and will need to be addressed during the implementation process.

“For example, the provision regarding the restriction of the right to vote to the armed forces needs to be clarified, and the absence of measures to ensure the participation of internally displaced populations is a source of concern.”

The statement also noted that the legal and institutional electoral framework will not be entirely finalized until there is a decision on the determination of constituencies, expected within two weeks. 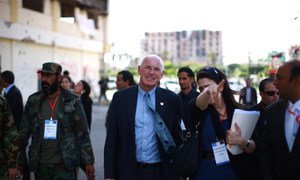