The UN human rights chief today appealed to Member States to act now to protect Syrians as the Government’s violent crackdown on peaceful protests continues unabated and the number of dead and injured continues to rise.

The United Nations human rights chief today appealed to Member States to act now to protect the Syrian people as the Government’s violent crackdown on peaceful protests continues unabated and the number of dead and injured continues to rise.

“The longer the international community fails to take action, the more the civilian population will suffer from countless atrocities committed against them,” High Commissioner for Human Rights Navi Pillay told the General Assembly.

“The Government of Syria has manifestly failed to fulfil its obligation to protect its population,” she stated. “Each and every member of the international community must act now to urgently protect the Syrian population.”

The 193-member Assembly met to discuss the report of the UN Human Rights Council from December last year in which that body strongly condemned abuses by Syrian authorities carried out as part of the crackdown.

The meeting comes in the wake of the Security Council’s recent failure to agree on collective action on the issue after Russia and China vetoed a draft resolution endorsing Arab League efforts to end the crisis.

“The failure of the Security Council to agree on firm collective action appears to have emboldened the Syrian Government to launch an all-out assault in an effort to crush dissent with overwhelming force,” Ms. Pillay stated.

Since 3 February, “the Government has used tanks, mortars, rockets and artillery to pummel the city of Homs,” she reported. “According to credible accounts, the Syrian army has shelled densely populated neighbourhoods of Homs in what appears to be an indiscriminate attack on civilian areas.”

More than 5,000 people have been killed since the uprising – part of the broader Arab Spring movement across North Africa and the Middle East – began in March last year, and senior UN officials have repeatedly urged the Government to stop the violence and hold dialogue with opposition groups.

“We are certain that the number of dead and injured continues to rise every day,” stated Ms. Pillay, who noted that while a lack of access has prevented her office from providing an exact figure, the number of people killed since last March is believed to be “well above” 5,400.

In addition, tens of thousands, including children, have been arrested, with more than 18,000 reportedly still arbitrarily held in detention. Thousands more are reported missing amid the crisis, which has sent 25,000 people to neighbouring and other countries to seek refuge and displaced more than 70,000 within the country.

She added that children have not been spared, with security forces having killed more than 400 children as of the end of January. Children, as young as 10, have also been subjected to arbitrary arrest and detention.

“I am outraged by these serious violations. I am very distressed that the continued ruthless repression and deliberate stirring of sectarian tensions might soon plunge Syria into civil war,” she stated.

Syria’s Ambassador Bashar Ja'afari responded by stating that the Human Rights Council’s report was drawn up based on “deceptive, unilateral media reports.” He reaffirmed his country’s right to protect its citizens and to combat terrorism and armed violence and to put an end to them.

Opening today’s meeting, General Assembly President Nassir Abdulaziz Al-Nasser voiced his deep concern about the ongoing violence in Syria. “The international community should call on the Syrian authorities to end the killings immediately and to put a halt to human rights violations.”

In a statement issued by his spokesperson last night, Secretary-General Ban Ki-moon voiced his grave concern about the escalating violence, mounting loss of life and deteriorating humanitarian situation, particularly in the city of Homs, which has been under siege and heavy shelling for more than a week.

“The United Nations will do all that it can to help those in need,” the statement said, adding that the Secretary-General calls on all parties to allow unfettered access for humanitarian partners to assess and respond to the situation.

“He urges all in Syria and in the international community to exert maximum efforts to help bring about a stop to the violence and a peaceful resolution to the crisis.” 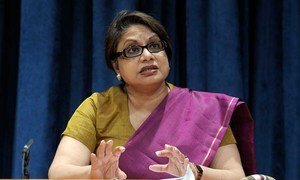 After another day of deadly violence in Syria, a senior United Nations official today added her voice to calls on the country’s Government to stop the killing and maiming of children.