10 February 2012
The role of radio as a facilitator of education, freedom of expression and public debate will be celebrated as World Radio Day is observed for the first time on Monday by the United Nations Educational, Scientific and Cultural Organization (UNESCO).

The role of radio as a facilitator of education, freedom of expression and public debate will be celebrated as World Radio Day is observed for the first time on Monday by the United Nations Educational, Scientific and Cultural Organization (UNESCO).

In a joint statement marking the Day, UNESCO Director General Irina Bokova and International Telecommunication Union (ITU) Secretary-General Hamadoun Touré said that in a quickly changing world, it was “we must make the most of radio’s ability to connect people and societies, to share knowledge and information and to strengthen understanding.”

With the ability to reach up to 95 per cent of the world’s population, radio is the most prevalent mass medium which has the ability to reach remote communities and marginalized groups at a low cost. It has also proven to be highly resilient as its scope and distribution platforms have grown with the development of new technologies.

“Radio is the mass medium that reaches the widest audience, especially the most marginalized parts of our societies,” said Ms. Bokova. “Free, independent and pluralistic radio is essential for healthy societies, it is vital for advancing human rights and fundamental freedoms.”

The observance of they day on 13 February also marks the anniversary of UN Radio, which was launched in 1946. UNESCO stressed the importance of radio as a vital source of information during natural disasters, and as a central instrument in community life with the potential of mobilizing social change.

However, UNESCO noted that worldwide, up to one billion people still do not have access to radio. In Nepal, for example, almost one fifth of the people live in areas without radio coverage.

“There are hundreds of radio stations in Nepal and we hope that they will use 13 February to celebrate their power,” said Axel Plathe, head of the UNESCO office in Kathmandu, the capital. “Radios have a crucial role in creating access to information in remote areas, especially in the mountainous regions where they are often the only media available.” 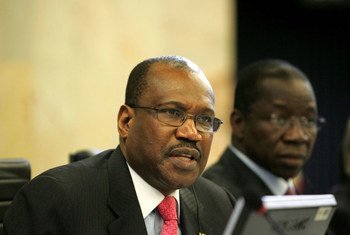 23 January 2012
Over 3,000 participants from 150 countries have gathered in Geneva today for a United Nations conference to review and revise the international treaty governing the use of radio-frequency and satellite orbits and which will focus on ensuring universal access to radio services worldwide.